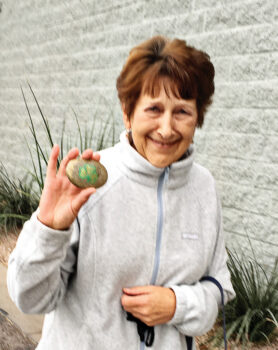 The final Garden Club Rock of the Month has been found. Irene Treece found the March rock hidden in one of the planters by the post office. She had looked in the planter several times on her walk, but this time she saw the sparkle of the gold glitter. Irene has earned herself a $10 gift card to the Horizon Room for her diligent efforts. The rock hunting season is over, but be on the lookout next fall when out on your walks. You never know where the Rock of the Month may be hidden, but the reward is worth the effort of looking. Have a great summer.