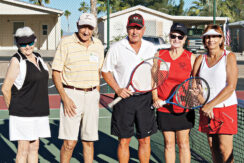 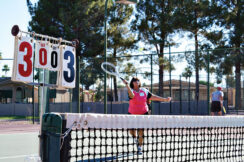 Christine goes for a shot. 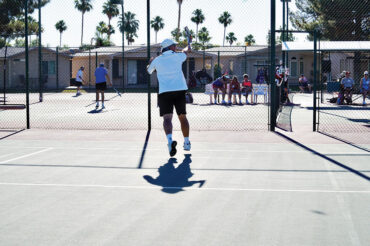 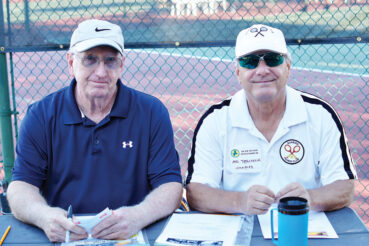 The Southeast Valley Tennis League hosted its first pilot test of league play at the SunBird Golf Resort on May 20, 2017. The SunBird Golf Resort has four tennis courts with the clubhouse and grand palm trees presenting a beautiful backdrop. A total of eight teams (Trilogy 1, Springfield 1, Iron Oaks 2, Sun Lake. 1 and SunBird 3 participated in a fun day of men’s, women’s and mixed doubles.

Participants started their morning at the courts at 6:45 a.m. with coffee and rolls and a practice session, with play beginning at 7:10 a.m. There was a short break for breakfast, with subsequent play continuing until noon. All in all, it was a very successful day for the Southeast Valley Tennis League. A great big thank you to the SunBird Tennis Club Committee of Holly Benson, Jo Lucas, Vicki Ayres, Teri Bitler and all others who helped coordinate the event.

League play will begin in November 2017, and will follow a unique format that is an abbreviated version of tennis sets which facilitates quicker play. Substitutions are allowed (and expected) so everyone has a chance to win for their team. Unlike official tennis matches, yelling encouragement to your teammates is allowed! Why wouldn’t you want to cheer on your teammate? This format is fun for all participants who like playing for a team.

Do you want to be part of this venture and like the team atmosphere? Do you want to make new friends in the tennis community? Contact Charlotte Wiard at [email protected]

Also, in November, the Southeast Valley Tennis League will be assisting The SunBird Tennis Club by adding five FREE tennis professional lessons for beginners of the SunBird Golf Resort.

So get off the couch, do your body a favor and get active!