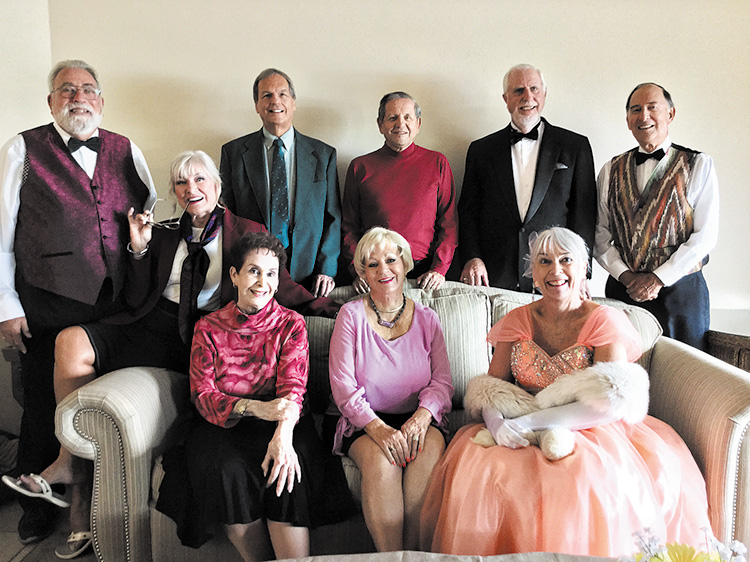 Plaza Suite is an award-winning comedy by Neil Simon composed of three acts, each involving different characters, all set in suite 719 in New York City’s Plaza Hotel. The show displays all of Neil Simon’s clever, dramatic, and comic situations and his use of engaging dialogue. Directed by Merrie Crawford, Plaza Suite will be presented in the San Tan Ballroom at Cottonwood CC each evening from Wednesday, Oct. 23, through Saturday, Oct. 26, at 7 p.m., plus a matinee on Sunday, Oct 27, at 1 p.m.

The first act, “Visitor from Mamaroneck,” introduces Sam (Jim Brown) and Karen (Phyllis Novy) Nash, who are revisiting their honeymoon suite in an attempt by Karen to rekindle the love back into their marriage. The second act, “Visitor from Hollywood,” involves a rendezvous between a movie producer, Jesse Kiplinger (Jim Janowski), and his old flame, suburban housewife Muriel Tate (Jo Birlin). Muriel has come for a chat between old friends; however, Jesse has other plans in mind and repeatedly attempts to seduce her. The third act, “Visitor from Forest Hills,” involves a married couple, Roy (John Crawford) and Norma (Kathy Miller) Hubley, on their daughter Mimsey’s wedding day. In a nervous panic, Mimsey has locked herself in the bathroom and refuses to leave. This act is filled with slapstick moments depicting her parents’ frantic attempts to cajole her into leaving the bathroom to attend her own wedding. Supporting cast members include Sally Holberg, Greg Posniack, and Mario Carranza.

This is a terrific, entertaining show, and since both of last year’s fall and spring shows were sellouts, make a note on your calendars to purchase your tickets online starting on Sept. 30 or in person in October before they’re all gone.