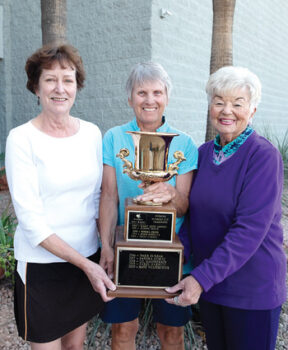 The Lady 18ers played their annual net tournament, the SunBird Cup, in February. Karen Gilmore played exemplary golf to win the tournament with a 63 and 60 for a net 133. Carol Garrett shot 70 and 58 for a net 128 (never give up). Kaye Wulfekuhler shot a steady 63 and 65 for a net 128 (Kaye regularly fleeces me in least putts competition. Always putt to win!). After the card off, Carol finished second, and Kaye finished third. Our net tournament rewards golfers at any handicap who are able to play good golf—often below their handicap for the two-week test. All three women are wonderful ambassadors for golf. Congratulations!

Karen rolled in five birdies the first week and five birdies the second week. When asked what was working for her this tournament, she said that she was able to play her approach shots very successfully and leave herself a short putt.