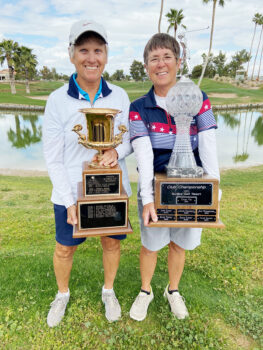 As the winter season draws to a close, the Lady 18ers celebrate our Club Champion and prepare for the 2021-22 season.

Our Club Championship took place over two weeks in March. Cindy Vig won, posting a lean, emergency-free pair of scores: 71 and 71. When we look back at the women who have won our Club Championship, we see the history of women’s golf at SunBird and some remarkable consistency.

We celebrated the end of the season, on Thursday, March 25 with a just-for-fun golf outing with the Men’s Club, lunch on the patio and awards for the season. It was a season like no other with changes and accommodation throughout the year, but some things never change: the love for the sport, the joy of spending time outside golfing with friends, and the determination to play better golf.