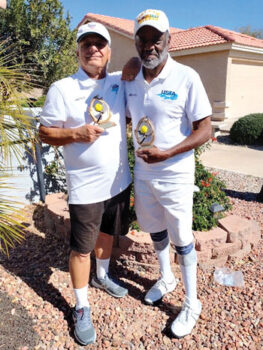 The Palm Creek Tennis Club visited SunBird on March 12 for a rousing match of Men’s, Women’s, and Mixed Doubles. Christine Terechenok and Sharon Van Greunsven coordinated the chicken and salad luncheon for the day. Thanks so much for everyone’s help! We love our volunteers.

On March 19 we put up a valiant fight against Mountainbrook here at SunBird. It was great to play against a new group of tennis enthusiasts and make new friends. Many thanks to Brian Turner and Dianna Wreford for the fried chicken luncheon. It was fabulous! The company was exceptional, and the tennis, well, we played hard and had fun! Thanks to all our volunteers and to JD Stephenson, our tournament coordinator.

We closed out the season with our annual year-end picnic on April 2 at the courts. It was a great way to celebrate the end of a wonderful season of camaraderie and friendship.

Two of our members, Mel Terechenok and Kenny Nelson, played in the Chandler City Tournament the weekend of Feb. 13-15 and won second place in the 65+ Men’s Doubles competition, and Kenny won the consolation 70+ Singles in a walkover. Congratulations, Mel and Kenny!

Great news! The SunBird Tennis and Pickleball Clubs are joining efforts to secure new sun/wind screens for the south and west sides of the sport courts. They will be choosing a vendor and applying to the SunBird HOA for assistance in funding this project.

At the time of this writing, our weekly club schedule though April is as outlined below:

We anticipate a few members will be leaving us for their summer homes during April, so our numbers may decline and, therefore, schedules may be modified.

If you are playing as a homeowner or resident (not part of the SunBird Tennis Club), please reserve your desired court times on the available slots on the court reservation sheets.

Your tennis tip for April: Keep your head still! If you find yourself mis-hitting shots, be sure that you aren’t moving your head as you swing. Follow the ball onto the racquet and keep your head still until the shot has been played.

If you are interested in joining our SunBird Tennis Club, please contact our president John Schlenker at 847-525-7648. Our next meeting will be held on Tuesday, April 5, at 5 p.m. in the Lakeview Room. Have fun and play well!