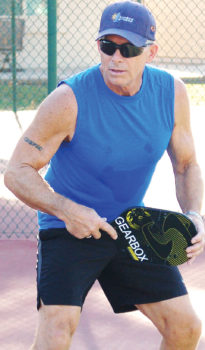 It is the goal of the SunBird Pickleball Club to encourage residents to be active, have fun playing the game and live an active life in a community where retirement is a pleasure. SunBird pickleball player and retiree extraordinaire Greg Libby is a great poster-child for life in an active community.

Greg, a 70-year-old disabled Marine Corps Viet-Nam veteran from Wintrop-Twisp, WA, has been a full-time resident at SunBird since 2006. Greg and his wife Jan moved to SunBird after raising two kids in the paradise playground of Northern Minnesota where they enjoyed a great life in what I call the “Great Wintry North.” Greg enjoys two rewarding hobbies; desert landscape photography and wood carving. He enjoys carving birds of all types. After moving to SunBird, he decided to put his photographic skills to work and started Greg Libby Galleries which he operates in the winter months at the Mesa Market Place, across the aisle from his wife’s boutique. Jan owns and operates TigerLily’s, where she specializes in women’s clothing and accessories. Greg spends many hours taking pictures at locations like Antelope Canyon, Cathedral Rock in Sedona and other picturesque locations in Arizona, Utah, New Mexico and Colorado.

In moving to Arizona, Greg and Jan felt they wanted to spend more time outdoors, enjoying not ever having to shovel sunshine and living an active life in their retirement years. Greg discovered pickleball when a few SunBird residents invited him to play roughly two years ago. He says, “It took a little time to get comfortable with the game,” but soon he found himself playing several times a week, having fun being active and making new friends and even though he goes to the gym several times a week, pickleball offers another form of exercise. Through pickleball, he has met many more residents at SunBird and now is a Pickleball Ambassador for the community. At age 70, he feels playing pickleball several times a week will allow him to stay active into his 90s, as his disability has not slowed him down. He has seen the sport grow in all of the over-55 communities, and the growth at SunBird has been phenomenal. He sees residents coming out to play and when the kids and grandkids visit, it is an easy sport for the family to play together.

Pickleball at SunBird is for everyone. Come out to the courts and join the fun. The SunBird Ambassadors welcome and encourage everyone to come out and play. In 20 minutes, they will have you playing the game and in less than an hour, you will be hooked on the game.