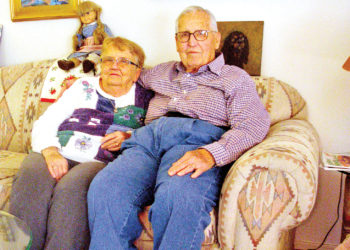 They look at their many years together like this: “Wedded bliss… I don’t know if we have had wedded bliss, but we sure had a great life, even with sorrows and losses.”

Both were raised on farms in Nebraska, Virgil’s home being 100 years old. It was the time of the Great Depression which led into WW II where Carol’s father served in the Sea-bees. Times were not easy.

“Virgil,” recalls Carol, “sat behind me in a college English class. I became interested in him because we had so many things in common.” Three years later brought marriage and then three sons, seven grandchildren and five great-grandchildren.

Following high school, Carol earned a BS degree from the University of Wyoming and an MS at Chadron College. She said, “I began teaching when I was 19, and that lasted 30 years. I especially enjoyed 4th grade children.”

Virgil’s ambition was to become a teacher also. He received his BA from Wayne State College the University of Wyoming for the MA and graduated from three colleges. Involved in high school sports, he continued football in two of the colleges. During his education career, he was also principal for 28 years.

Arriving as residents to SunBird in 1995, the two had learned about our complex while visiting Virgil’s parents. They return to Wyoming in the spring for half the year.

From 1949 to 1957, Virgil served in the Navy, both active and reserves. He also flew for the Civil Air Patrol 1943 to 1984. He vividly recalls terrible blizzards in 1949 when he flew over the vast plains areas as a pilot for Civil Air Patrol. Surveillance was impossible.

Another situation makes this couple even more unique. For many years, they have been part of the firefighters in their area, where at least five houses were lost. They remembered one fire where Carol and Virgil prepared food for over 50 firefighters.

Indeed, this couple is active, achievers and quite unique. Incidentally, these ex-teachers are very nice people.