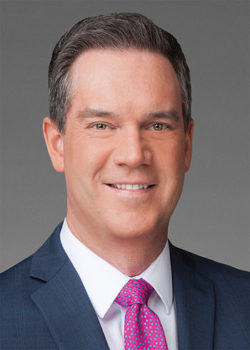 On the morning of Tuesday, March 5, Steve Irvin, News Anchor for Channel ABC-15, will present what it’s like to work in a hectic, major TV newsroom. Steve is an Emmy-award-winning journalist and anchor of ABC-15 News. He joined ABC-15 News in 2002 as morning anchor/reporter.

Steve grew up in Madison, Wisconsin, and graduated from the University of Wisconsin, but his work in television news has taken him all over the world.

Despite those travels, Steve says the best stories are always right in his own backyard. “I’m constantly amazed at the strength and courage of everyday people,” he says. “It’s one of the great joys of this job – the privilege of telling stories.”

Steve’s work has earned him numerous accolades. He has earned four Rocky Mountain Emmy Awards and received the Best Anchor award in 2004 and 2006. In his spare time, Steve enjoys working out, reading and playing golf.

On the morning of Tuesday, March 12, Dr. Lynn A. Genet, a practicing physician and owner of American Physical Medicine, will speak at the club. She received both her Bachelor of Science degree in Human Biology and Doctor of Chiropractic degree from the National College of Chiropractic. She treats all areas of the spine with a focus on head, neck, shoulder, arm and hand pain, using techniques that are gentle and effective.

Terri holds a degree in Communications from Oakland University and is a graduate of the University of Notre Dame, U.S. Chamber of Commerce’s Institute for Organizational Management. Terri lives in Chandler with her husband George, and together they have four children and nine grandchildren.

The Sun Lakes Rotary Club will meet this month for breakfast in the Sun Lakes Oakwood Country Club Ballroom on the first, second and third Tuesday mornings from 6:30 to 8:00 a.m. and on the fourth Tuesday evening for light refreshments from 5:30 to 7:00 p.m. For visitors, your first visit is on us. To let us know you are coming, contact Jon Lyons at 602-769-7462.