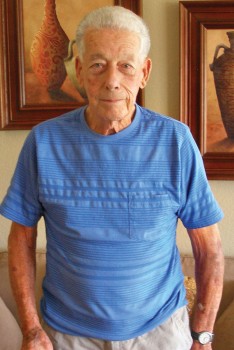 Things you don’t know about this gentleman.

1. He loves to golf and has scored five holes-in-one.

2. He sailed to England on the Queen Mary.

3. He and some military buddies were in town having a few and watching a young lady being tattooed in a shop. Invited in, Van had the name of a girlfriend tattooed on his arm. “Many of the others didn’t even recall getting theirs,” he stated.

4. A year ago he completely gave up on the computer.

On a Washington farm, Van Christman grew up during the Great Depression. There were twelve children and the dad worked for the railroad. His mother did a lot of washing and cooking.

“I was very active in 4-H and Future Farmers of America and enjoyed showing the animals I raised and competing at state fairs.”

He skipped college to care for his two sisters after the premature deaths of his parents.

All six of Van’s brothers served their country in the conflict and one, Van’s twin brother, perished in battle. Van joined the Army Air Force in 1943 for four years and was sent to England and Ireland as a veterinary tech for two and a half with rank of staff sergeant.

A downside of the tour was the uncontrollable buzz bombs fired by the Germans that would land anywhere. Cessation of the buzzing meant they were on the way down.

“Ireland is a beautiful country and the Irish people were fabulous. They invited us to dinner even though they hardly knew us,” he said.

After the war Van returned again, with Mary this time.

In 1947, military finished, Van worked briefly at Amour; then began a 38 year career with General Electric. Starting at the bottom in the warehouse, he made $.60 an hour. He received numerous commendations, accolades and monetary raises along the way. By the time he retired in 1985 he had advanced to the position of Contract Sales for the entire Western Region.

As per custom, G.E. rewarded the large wholesale buyers of appliances with a trip to Europe and other like places, accompanied by Mary and Van.

Married in 1947, the couple was blessed with twins, Judy and Jed and later grandson Andrew arrived.

After residing in several places in Washington, the couple came to live in SunBird in 2004. “Many of our friends had moved to Arizona before and we liked the idea of playing golf all year round,” said Van. Sadly, following a long illness, Mary left him in 2007. They had been married 60 years.

Van’s SunBird Community Church is important to him. He has enjoyed golfing, fishing, traveling throughout the country and world, watching sports—especially football—and gardening.

With his daughter Judy Cockrell nearby, Van lives quietly in his beautiful Championship home reflecting on the many adventures and the good life he has experienced.