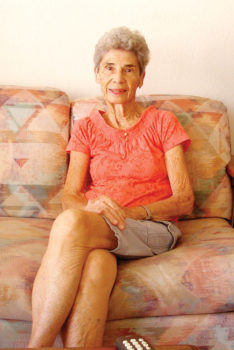 When a little girl named Toni was born into a Pennsylvania family consisting of brother and sister, she had no inkling of the exciting life she would live.

Her mother was a housewife. Her father with an engineering degree traveled as a salesman. After high school and wanting to be a secretary, she enrolled in Stenotype Institute. “I never wanted to go to college,” she said. Later she was secretary for manager of Mt. Laurel Township. In fact, she worked for many as, according to Toni, “They never stayed long on the job.”

In 1946, here was Joan, Toni’s classmate and best friend. Add a couple of guys named Bob and Jack and the scene is set for a lifelong adventure. The boys were best pals who were released from the navy at the conclusion of WW II. Jack had been an Aviation Machinist Mate serving on Tinian in the Mariana Islands.

Once the four met up, Jack and Joan with Bob and Toni were often together. In 1950 the latter married. Living in first Pennsylvania and then New Jersey. They raised two sons. All was well until Bob’s death in 1993.

1n 1995, Joan’s death occurred. She and Jack had four children and were now living in Arizona. Meanwhile Toni was managing in New Jersey.

Jack’s career included the FBI, marketing department of Ford Motor Company for 20 years, and owner of a franchise of a personnel agency, had established a Scottsdale ceramic business until finally becoming a real estate broker.

While on an Elderhostel trip to Arizona, Toni called Jack. The reconnection led to marriage in 1996, and eventually a move to SunBird. “Jack really liked the people and living in SunBird,” Toni recalls. Misfortune struck again in February 2013 and, after a brief illness, Jack died.

Always a positive person, Toni dealt with circumstances as they were. She continued to golf until recently, still plays bridge as she and Jack would do, attends the SunBird Community Church and sings in their choir, is an avid creator of counted cross-stitch, is treasurer of the German Club, is a long time Garden Club member and has recently booked Marshall Trimble to be their speaker in January.

Toni has a passion for attending Road Scholar (formerly Elderhostel). She has taken trips throughout the country to a variety of areas and activities. Some were Civil War locations, skiing, bicycling, canoeing, etc. Road Scholar is a not-for-profit organization providing educational travel tours and geared to the older adults. If you have interest in this, contact Toni Greisger at 895-4459.

Want more? Soon Toni leaves noon for New England to do some genealogy with family about past relatives, some who landed around 1620 on Cape Cod. Besides checking cemeteries they hope to locate an 1885 quilt made by her grandmother.

Bon Voyage, Toni. Come back to us soon.