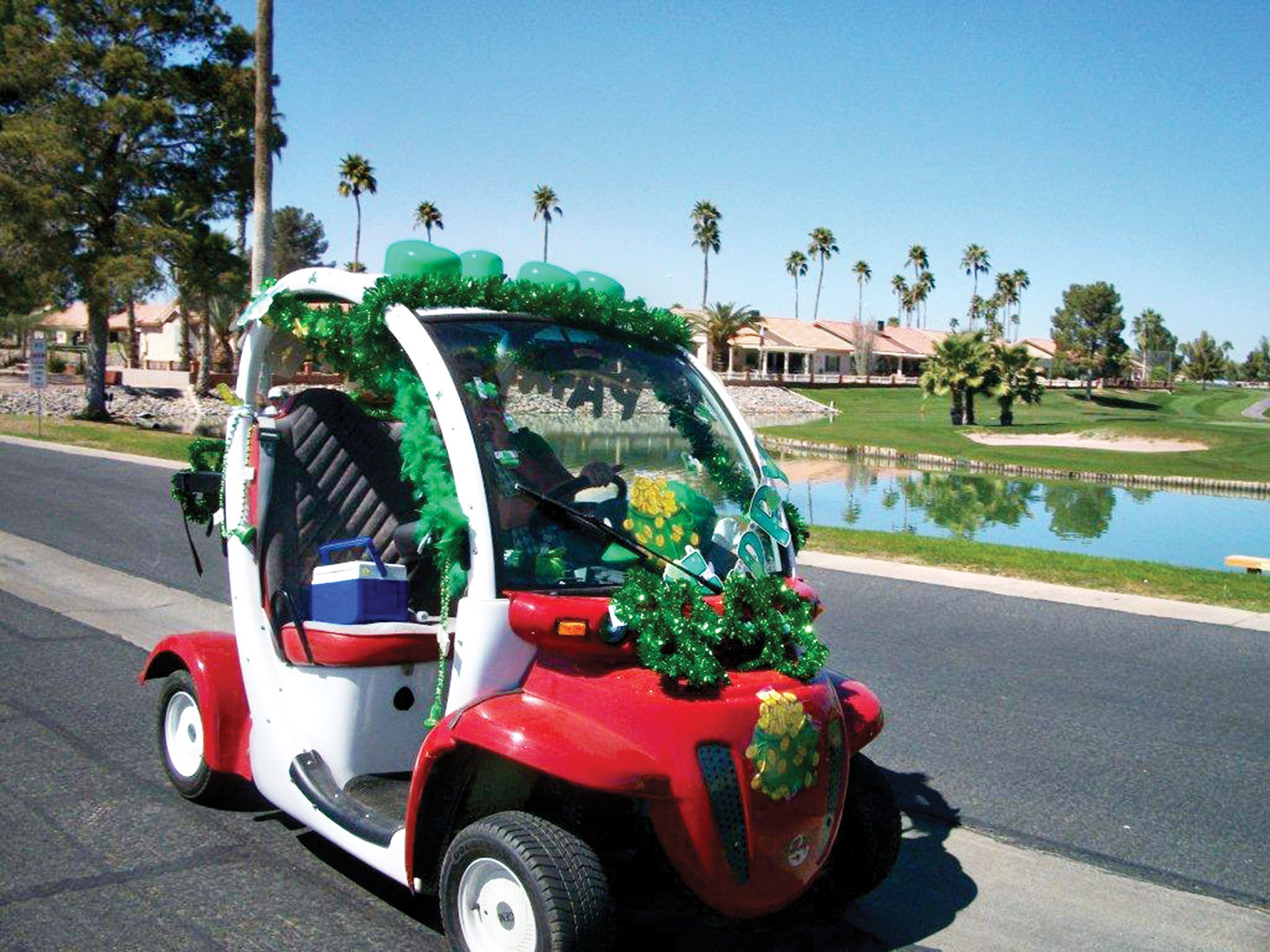 The Irish Club met in the ballroom on February 2 for our monthly meeting. There were 101 members present. Christine Terechenok, membership chairman, announced that we now have exactly 200 members in the club! We are bursting at our seams, so no new members will be accepted at this time; however, anyone interested in joining our club can sign up on a waiting list.

February is a busy month for us. Our annual highlight is the trip to Laughlin, which was on February 6, 7 and 8. We stayed at the Riverside Casino, and a good time was had by all.

We are looking forward to March which is the grand finale to our year’s activities, except for the patio party in April, which will bring to an end another year of Irish frolic and fun. March 5 is the Basket-Making Party at Margaret O’Brien’s house, beginning at 1:00 p.m. and featuring Pizza at 3:00 p.m. It’s always a great time at Margaret’s. March 7 is Irish Club Game Day. It begins at 2:30 p.m. and includes horseshoes, beanbag toss and shuffleboard. Naturally, there will be food on the patio after the games.

And, of course, the Irish Club’s Corned Beef and Cabbage Dinner, which will be held on Tuesday, March 13. Janet Rosenstock is in charge of this event, which consists of a Happy Hour at 5:00 p.m., dinner at 6:00 p.m. and entertainment by Irish dance school children and DJs Toni and Mark for Irish jigs (and other dances) later.

On St. Pat’s Day, we will have our third annual Walt Kinney Golf Cart Parade. Be on the lookout for at least 20 golf carts, all decked out in Irish finery and full of Irish club members having the time of our lives. It’s really a great, fun event. After the parade, of course, will be food and partying on the patio. There will be prizes for first, second and third place carts. I don’t know who will be judging this year, but it is always great fun to see the judges busily checking carts for their scoring cards. Serious stuff!

Yours truly had the dreaded flu last month, so Secretary Darlene Google stepped up and wrote this column for me. Thanks, Darlene, for a great article.

An Irish priest is driving down to New York and gets stopped for speeding in Connecticut. The trooper smells alcohol on the priest’s breath and then sees an empty wine bottle on the floor of the car. He says, “Sir, have you been drinking?” “Just water,” says the priest. The trooper says, “Then, why do I smell wine?” The priest looks at the bottle and says, “Good Lord! He’s done it again!”