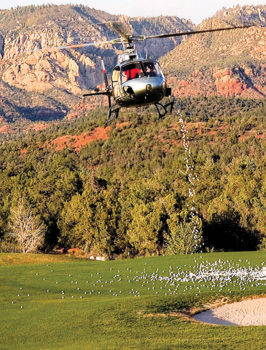 On Sunday, March 26, the Sun Lakes Rotary Club will host its 24th and largest Charity Golf Tournament in history. One hundred eighty golfers will fill the three Nine Hole Courses at Oakwood Country Club. Prior to the 12:30 p.m. shotgun start, a helicopter will hover over the practice range and drop numbered golf balls in a contest to see which ones will win some significant prizes. Closest to the hole wins. Once on the course, contestants will participate in Bazooka Golf Ball Launches, hole-in-one contests, putting contests and fun. The Live Auction during dinner includes some fabulous items, including golfing for three at the famed Winged Foot Golf Club in Mamaroneck, NY, plus round-trip airfare.

Regarding the Club’s FIRST EVER Helicopter Golf Ball Drop, it’s basically a raffle with pretty good odds. Purchased golf balls are assigned numbers based upon how many golf balls purchased. On the day of the event, the numbered golf balls are loaded onto a helicopter. It flies over the golf practice range and drops them onto a green from an altitude of 90 feet. The balls that are in the hole or closest to the hole are the winners. For details, contact Rotarian Peter Meade at 480-600-2458.

Bazooka Golf Ball Launches will take place on each of the three courses, inserting an exciting way to improve scores . . . and to help raise money for Rotary’s charities. If you can’t hit a golf ball with a driver, you can probably use the Bazooka and shoot one 350 yards straight down the fairway. (Come on, when was the last time you did that?) The Bazooka Ball Launcher is literally a blast!

Each year, the Sun Lakes Rotary Golf Tournament has yielded significant dollars for the club’s many charities, centered on the Chandler Unified School District. The club has given dictionaries to more than 44,000 third graders; taught Choices to over 50,000 ninth graders; given over $100,000 for the eradication of polio worldwide and over $700,000 to the Rotary Foundation. It has given financial scholarships to the Boys and Girls Clubs of the East Valley, as well as Hamilton High and Chandler High and Chandler-Gilbert Community College. It has supported Neighbors Who Care, and much more.

At last year’s tournament, John White, owner of Classi Golf Cars, did something heroic. He brought a golf cart to one of the Par Three holes for display purposes. It was not to be given to any golfer who shot a hole-in-one. But this was misunderstood by the monitors at the hole. Someone did shoot a hole-in-one and he was told he had won. John honored this achievement, even though that was not intended.

For details on the tournament, contact Don Bell or Ed Anderson, Co-Chairs, at 612-396-0069 or 480-385-9266. Cost for golfers is $125 which includes box lunch, golf, and dinner. For those wishing to attend the dinner only, the cost is $35. It will be held in the Oakwood Grand Ballroom, highlighted by Silent and Live Auctions.