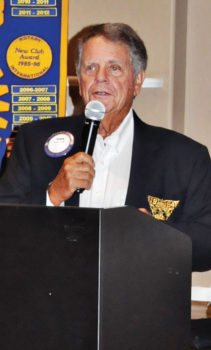 Rotarian of the Month Rowin Floth

Rotarian of the Month for November is the deserving Rowin Floth who leads the Sun Lakes Rotary Club each year in our Veterans Day recognition. In addition, Rowin is President of the Sun Lakes Rotary Foundation 2000, delivers the Splash to 500 driveways each month and helps in all club events.

Rowin is a U.S. Naval Academy graduate. Following graduation from Annapolis, he served as a naval officer from 1964 until 1970. He joined our club in February, 1997, having previously been a Rotarian in West Omaha, Nebraska. Before moving to Sun Lakes, Rowin served as Executive Director for Planned Giving at World Vision of Federal Way, Washington. He and his wife Paula live in Oakwood and have two children.