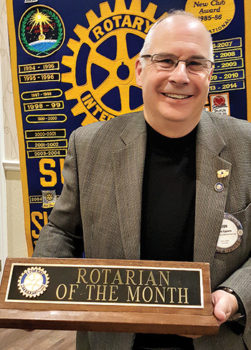 The Sun Lakes Rotary Club is proud of the Rotarian selected for the month of March. This fellow joined our club on May 30, 2017. He was a member of the Chandler Rotary Club prior to joining us. Easy to spot, he is the one who is always on the run with a big smile on his face. Jon Lyons hasn’t stopped running since he took over as membership chairperson, and results have been amazing. We now have almost 100 members!

That is not all Jon has gotten into. He is active in Choices, a program designed to prepare high school students for future careers and advanced education. He is involved in the Dictionary Project for all the third-grade students in the Chandler School District. He also helps deliver the Splash and plays a major role as part of our Golf Tournament Fundraiser.

Jon graduated in accounting from ASU and was hired by Honeywell in 1980. After 13 years, he moved on with the company in finance. In the last 10 years, he was busy in servicing and procurement of other companies. He obtained a lot of frequent-flyer mileage, flying to many exotic locations for his company. He loves to travel, much more so with his wife Karen. Now they concentrate on people and their culture. One time they took a 35-day cruise from China to Sidney, Australia.

Family is very important to Jon and Karen, and they are extremely happy that their son (with two grandkids) and daughter (with one grandchild) live close by.

Jon has talked about a little story when delivering dictionaries to two grade schools. He was enjoying coffee at Starbucks and heard two baristas talking about their company wanting to do community service. Jon immediately said he could use their help presenting dictionaries to the third graders at schools nearby. The baristas showed up and shared in the joy of seeing young boys and girls receive their Rotary dictionaries.