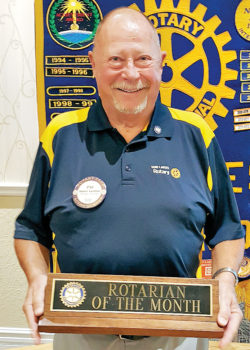 The Sun Lakes Rotary Club’s Rotarian of the Month was born and raised in Canada. He was president and CEO of a national insurance company in Toronto. Then in 1991, Stan Kaufman moved his family from Toronto to Fargo, North Dakota, where he established Fargo Western States Life Insurance Company.

Then in 1999, something very special happened. His entire family – wife, children and Stan – all became American citizens at the same time.

Stan was first active in Rotary when he joined the Eglinton Chapter outside Toronto in 1982. Next, while in Fargo, he was President of the Fargo Rotary Club. But the cold weather “got old,” so the family moved to Arizona… and a short while later, Stan joined the San Tan Crown Club where he also served as president in 2012-2014. He now is an active member of the Sun Lakes Rotary Club. He not only joined himself, but brought along six other members to join Sun Lakes Rotary.

Stan’s whole family is influenced by Rotary. His daughter Kimberly was a RYLA exchange student in Belgium. He said she was “a little scared going to a strange country, with different customs and language. However, when she came home, she was a poised, strong, confident young lady.”

Stan further reports, “Sun Lakes Rotary Club is the fifth Rotary Club I have been involved in a 37-year ride with Rotary. While I’ve been a member here in Sun Lakes just over a year, it is the most active club I’ve ever been associated with. The passion behind our members’ commitment to serving the needs of our community’s youth and our veteran community is truly amazing. For my part, I look forward to continuing to chair the Hooked on Healing Veterans’ Ride, our annual fundraiser to benefit wounded warriors returning to civilian life in Maricopa County. I’m also looking forward to doing my part delivering the Splash and Source Books, as well as flipping flapjacks every November at the annual community Pancake Breakfast.