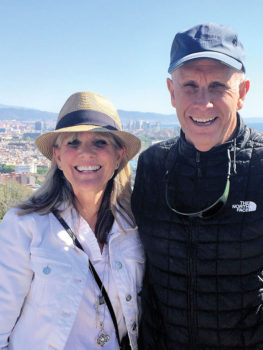 On Tuesday, November 1, Kevin Cherilla, international mountaineer, (conquering the summit of Mt. Everest in 2007 was one of his greatest personal accomplishments) will be the speaker along with his partner Kristen Sandquist. His passion for climbing and helping others reach their personal goals has impacted the lives of participants at the various destinations he has climbed and includes individuals who are blind, paralyzed or have lost limbs.

Their own adventure began when Kevin was the expedition leader for 25 individuals, eight of whom were blind, on a climb up Mt. Kilimanjaro to raise awareness for those with disabilities. Kristen was one of the guides on this team. The team broke four world records, raised over $200,000 for the blind in Arizona and assisted a local orphanage that housed 24 blind, albino children in Tanzania. After this historic climb, the two joined forces to create K2 Adventures Foundation and K2 Adventure Travel. They’ve been helping others around the globe ever since.

On Tuesday, November 8, Sun Lakes Rotary Club will commemorate Veterans Day with a special program to which all veterans are especially invited. This is always a memorable program, and while few veterans are still able to wear their uniforms, all are invited to try.

On Tuesday, November 22, Brian Sexton, Communications Manager of Phoenix-Mesa Gateway Airport, formerly Williams Gateway Airport and Williams Air Force Base, will be the speaker. Williams Air Force Base played a strategic role in America’s aviation history. Over a span of 52 years, more than 26,500 men and women earned their wings at Williams. The Base was closed in 1993 and officially reopened in March 1994. Present Today, Gateway serves more than 35 cities with non-stop service via Allegiant, and contributes $1.3 billion annually to the Arizona economy.

On Tuesday, November 29, Steve and Peggy Alameda of TopFlavor Farms in Tucson will tell us all about the foods we eat. Topflavor Farms is a family-owned and operated company dedicated to growing the very best produce for all of us. They believe better living starts with better produce, and better produce comes from Topflavor. They own TopFlavor Farms and Sabor Farms along with Steve’s two brothers, Craig and Tony Alameda. The Alameda family has been in the farming business for over 76 years. They grow vegetables in both Yuma, Arizona and Salinas, California. They also grow cotton, wheat, alfalfa, and Sudan grass as rotational crops in the Arizona desert during the spring and summer months. They also are in partnerships with a harvesting company, a seed company, and a bee operation.