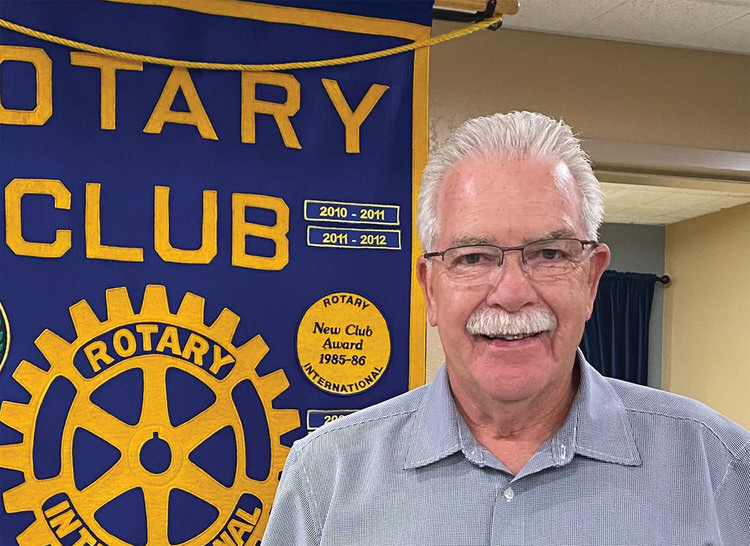 Rotarian of the Month

Rotary Club of Sun Lakes (RCSL) is honored to name Dick Meyer as the club’s October 2022 Rotarian of the Month. A Rotarian since 1988, Dick Meyer served as club president at his Nebraska Kearney Noon Rotary Club. He was very active in RI District 5630’s Youth Exchange Program. He joined RCSL in November 2021. Dick has actively served on golf and membership committees. Dick is a former University of Nebraska—Kearney EDAD Associate Professor and Chair Emeritus. He earned his Education Doctorate and master’s degrees at University of Nebraska. Over his years in education, Dick received many distinguished honors of excellence. Dick’s hometown is Hebron, Neb., and he lives in Gilbert, Ariz., with wife Sheila. Congrats to Dick Meyers.

The club continues to support local nonprofits by donating $300 to Amanda Hope to purchase fleece to be used to make 20 blankets for children with cancer. The club is collecting candy and getting ready to bling out their cars to be at Amanda Hope’s Trunk or Treat event on Oct. 28.

RCSL supports Rotary International’s PolioPlus campaign. Per RCSL Rotarian and Sun Lakes resident Peter Meade, it would be great to see this deadly disease vanish from the face of the planet. Unfortunately, that hasn’t happened yet. Polio is still surfacing here and there. In recent memory, it has always been in the Middle East or parts of Africa. This summer, though, it made an appearance in, of all places, New York! Proving that polio is relentless, and if given the opportunity to spread, it will.

Since 1988, there has been a 99.98% reduction in polio cases worldwide. Rotary International has been a key player in making this happen. This year, Rotarians again have an opportunity to keep it moving in the right direction. PolioPlus Rotary teams and resources are being utilized to deliver lifesaving care, medicine, and treatment to those who need it most. This year, RCSL is again going to use the PolioPlus Virtual Board where donors can purchase squares for $10 each. The squares will be randomly assigned, and a random number generator will be used at a live/Zoom meeting to determine the winners. For every 100 squares sold, there will be a winner who will have $1,000 donated in their name to PolioPlus.

For more information about RCSL programs and membership, see www.sunlakesrotary.com.

In the Summer of 2002, Rotary Club of Sun Lakes (RCSL) Rotarian Dwight Grotewold visited the Rotary Club of Logan, Utah, and learned about their elementary school project called A Dictionary for 3rd Graders. As a former K-12 teacher and recently retired Vice President of Admissions for the University of Colorado, Dwight introduced this project to the RCSL Board and members for implementation in Rotary year 2003-04. The RCSL 3rd Grade Dictionary Project fundraising was immediately started, and in RCSL’s first year, over 5,000 dictionaries were distributed to 3rd graders in the Chandler Unified School District, Gila Indian Schools, private schools, and Title 9 programs in the immediate Chandler/Gilbert area, along with the Gilbert Unified School District for just the first year.

Past distribution required each RCSL member and friend of the RCSL to attend a dictionary preparation “pizza” party, then personally contact each school to set up a day of distribution that would allow them to provide each student with their own dictionary, with the classroom teacher involvement, which usually takes place in the gym, lunchroom, and, with some schools, an outside area.

RCSL Rotarians and others believed that this project would help each student become better spellers, readers, thinkers, and speakers. And the teachers have constantly been the number-one supporter, as they use the dictionary for class projects and take-home assignments. A Student’s Dictionary & Gazetteer is more than just words and definitions. It contains sections on world geography, civics, multiplication tables, science, the water cycle, planets, the Constitution, Bill of Rights, and presidents, and even has illustrations for sign language and braille. And when the students see the longest word in the English language, which contains 1,909 letters, the fun starts. As a part of the presentation, we ask the teacher and students to write us a short letter on how they like their dictionary after a couple months. Their letters will make you proud of why you are part of this outstanding annual education project.

As RCSL begins its 19th year, RCSL is reminded of the great experiences of the past this project has provided for the students, the local communities, the 135 Arizona Rotary clubs and members, along with friends of Rotary. To name a couple of highlights that RCSL has experienced:

• In 2007 State of Arizona Governor Janet Napolitano was so enthusiastic about this Rotary project that she personally participated in one Mesa school presentation.

• In 2010 Dwight Grotewold and Sun Lakes resident/PDG Gary Whiting (the president of the Rotary Gift of Life-Arizona Foundation that provided 309 lifesaving heart surgeries for needy children with congenital heart defects) obtained additional outside funding to provide some 70,000 dictionaries across Arizona via the Arizona Rotary clubs and assisted by other interested groups.