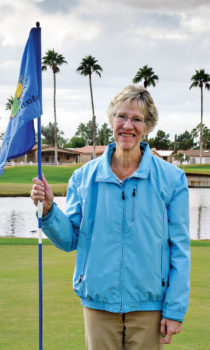 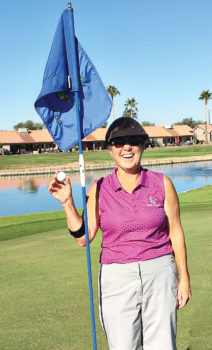 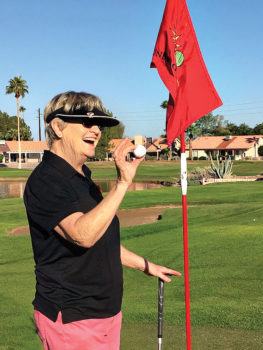 November ushered in a flurry of hole-in-ones from our group. Heather Verbitsky and Cindy Vig aced hole #8, and Becky Sargeant aced #13. Statistics say that an average handicapper will shoot a hole-in-one 1 in 12,000 times. Who’s up for checking it out? All we need is 12,000 balls and some spare time.

Mark your January calendars for the Couples Net Shoot Out on January 13 and the club’s Solheim Cup on January 22 and 29.

1. I can leave the flagstick in the hole when putting on the green?

____ No, it must be removed or incur a two-shot penalty if my ball hits it.

2. You accidentally move your ball or ball marker on the green (e.g., drop your putter on it or kick it by mistake). Do you:

____ Replace it with no penalty

____ Replace it with one-shot penalty

____ Play it where it moved to with no penalty

____ Play it where it moved to with one-shot penalty

3. When taking a drop ball, I can now drop the ball from ankle height instead of shoulder height.

____ False, it still needs to be dropped from shoulder height.

____ True, the ball can be dropped from any height as long as it is more than two inches off the ground.

____ False, it has to be dropped from at least knee height.

4. How many minutes do you have to search for your ball?

5. I do not have to play out of a bunker. I have an option to drop outside bunker.

____ False, you can never drop outside bunker.

6. If my ball ends up out of bounds and local rules permit, I do not need to re-tee and can drop close to where it went OB, including the fairway. I am not playing an elite event or pro tournament.

____ True. You no longer are required to play your third shot from the tee. You may play your fourth shot from where you drop for pace of play.