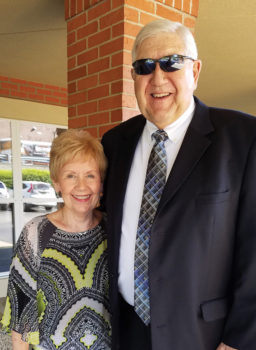 Pat Miller, one of three directors of the SunBird Singers, began the choir at our SunBird Church services and welcomes you each Sunday at 9 a.m. Her husband Hank is one of the Sunday speakers.

During the state lock-down, one activity sorely missed was our SunBird Sunday nondenominational church service—complete with friendly smiles, moving music, cookies, and a meaningful sermon from a rotating group of great ministers. It has been easy to take the service for granted.

It is also easy to assume that our beautiful choir has always been there, but, actually, it didn’t start until 2012 when Pat Miller began it with only 12 singers. It has grown to enhance the services twice a month during the winter months.

Pat had assisted Joyce Bae for a season with the SunBird Singers when Owen became ill. After Owen and Joyce Bae retired, Pat, along with Kim and Mike Hanson, became co-directors.

A high school vocal teacher in Hamilton, Ohio, until retirement, Pat and her husband Hank have actually been residents at SunBird since 1998. While attending the Community Church of SunBird, a friend encouraged her to begin our choir, and 12 singers have grown to many, especially during winter months.

These days, Pat is excited about the new Bell Choir. Originally, a church member donated a basic set of handbells. Her church in Ohio made theirs available, and she was able to get them in addition to the ones we already had.

Pat’s husband Hank is often by her side. He is one of five speakers during services who rotate different Sundays with four ministers. He also prepares and leads a weekly Bible study during the winter season. Hank’s commanding voice narrates the SunBird Singers’ programs. During his career, Hank was a coach, high school principal, and assistant superintendent of schools in Hamilton, Ohio. The couple has three children, seven grandchildren, and five great-grandchildren.