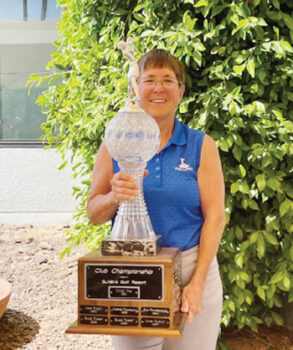 The SunBird Ladies League 18ers held their annual Club Championship on March 8 and 15. This is a two-week flighted, low gross tournament, using the total scores from the two weeks.

Congratulations to Cindy Vig on winning the tournament and becoming the 2022 Club Champion! Cindy came in top place with a gross score of 139 over two weeks—that is only 7 over par for the course! She shot a 70 in week one and 69 in week two. This was the eighth time that Cindy has won our Club Championship! Way to go, Cindy! You obviously know how to hit them long and straight!

As this was a flighted tournament, prizes were given to the top three players in each flight:

The trophies and prizes for the Club Championship gross tournament and SunBird Cup net tournament, which was played in February, were awarded at an end of the season Shotgun Mixer with the Men’s 18ers Club on March 25. The SunBird Cup tournament was won by Lore Schaefer, with Sue Malley in second place and Pat McInnes coming in third. After a “step aside scramble,” the ladies and men enjoyed a delicious lunch on the patio, prepared by Joe Turley and his staff from the Horizon Room. It was a great way to celebrate golf and wind down the season. Congratulations to all the participants in the Club Championship and SunBird Cup tournaments!