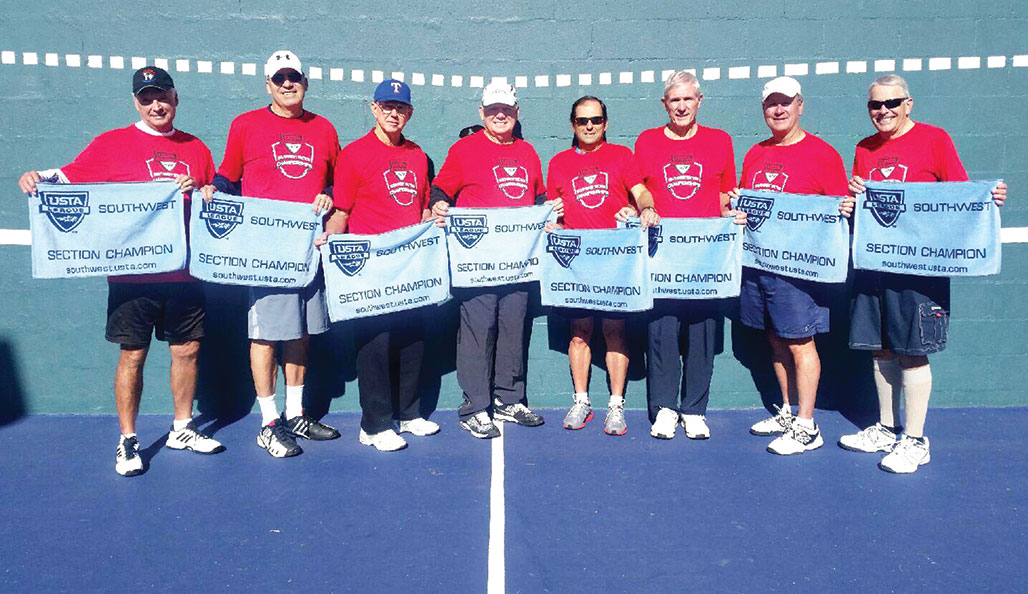 Our men’s USTA team had exciting news. They captured the 2014 65 Plus USTA 7.0 Sectionals held at the Tucson Racquet and Sports Club. There were teams from El Paso, Las Cruces, Albuquerque, Tucson and Sun Lakes competing in their bracket. They now are advancing to the national championship held in Surprise on March 20-22. Team members are Hal Davis, Jim Utter, Gary Porter, Ken Stanley (captain), Zev Yardeni, Phil Messer, Jerry Rex and Randy McManus.

The New Year’s afternoon social was well attended, despite having to be rescheduled, moving from New Year’s Eve to the following Saturday because of rain. It was open to all friends and neighbors in the Sun Lakes area. The courts were full and three rounds of play were set up. Each round found you in a new group, with the idea of meeting people you might not normally get to know in your regular tennis routine. Between each session, there were wonderful potluck appetizers and desserts to nibble on provided by the attendees. We hope to continue having these on a monthly basis so we can share tennis fun with new friends and neighboring clubs.

December was a busy month because we held both the club Mixed Doubles Tournament and the club’s Singles Tournament for men. Mixed Doubles winners were (8.0) Mario and Rebecca Dominguez, (7.5) John and Dar Brasch and (7.0) Art Baessler and Dottie Deveraux. Singles winners for 4.0 were Austin Mason in first place and Mike Corey in second place. For 3.5 Art Baessler came in first place and Rick Kenny in second place.