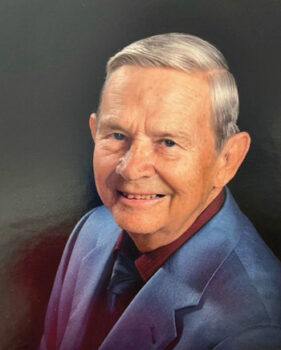 Melvin (Mel) Duane Flinkman passed away suddenly on Friday, April 8, 2022. He was 88 years old. He was born Dec. 21, 1933, to Eino W. Flinkman and Elsie D. (Carlson) in Enumclaw, Wash., where he spent most of his life before moving to Chandler, Ariz. Graduating from Enumclaw High School in 1952, he went on to attend Washington State University.

He married and had three children: Curtis, Melvin Jr., and Kathryn. After his divorce, while working for Metropolitan Life in Seattle, he met Marilou Hoyt. They married on March 22, 1969, adding five more children to his family, bringing the total to seven. He always said he loved Marilou, and if she came with kids, that was great. Growing up, the kids remember camping trips and hiking as their favorite summer vacations. While Marilou cooked for the pack, Mel led them on their adventures.

Moving back to Enumclaw shortly after he and Marilou were married, he started a very successful State Farm Insurance business. Known for his kindness and care for his clients, Mel usually arrived at the scene of an accident or situation because, “They need to see me and know it’s going to be okay.” Retiring in 1997, he and Marilou traveled the world visiting every continent except Antarctica. They sailed the Amazon, the Nile, the Rhine, and the Yangtze Rivers. They visited Russia, China, Australia, Brazil, and Africa. As they got older, they explored the United States and loved cruising. They started visiting SunBird Retirement Community in Chandler, Ariz., for short one-month visits, which turned into three months, then five. That’s when they bought their first small home there. Finally, in 2003 they decided to sell their Enumclaw home where their kids and grandkids grew up and moved full time to SunBird.

Mel was an avid sportsman. He loved skiing—teaching most of his kids to ski, tennis—his kids and grandkids still talk about how he taught them to play and always beat them, golf—with eight holes-in-one, and fishing. Their annual fishing trip to Alaska to visit son Les and daughter-in-law Laura started in the 1980s and continued well into the 2010s.

Four years after Marilou passed away, Mel met Charlotte Donaldson in November of 2016 after a “matchmaking” friend invited them both to dinner. They went to the New Year’s Eve dance together, and the rest was history. They both loved to dance, and Charlotte says he was a great dancer! They traveled and took cruises together, and on Feb. 7, 2017, they pledged their commitment to each other exchanging rings. Mel’s kids loved that she appreciated his sense of humor and how much they laughed together. Charlotte’s kids loved how he treated their mom.

A service will be held late summer in Enumclaw, Wash., and at SunBird Retirement Community in the fall when all his snowbird friends return for the winter.