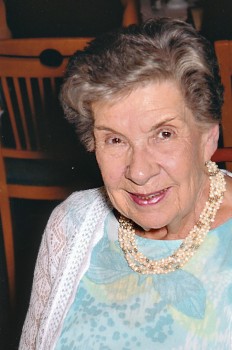 Carmen Hanson, a longtime winter resident of SunBird, died peacefully surrounded by family at St. Elizabeth Hospital in Enumclaw, WA on June 24, 2015 after a lengthy illness. She was 83.

Carmen and Wes met and were married in North Dakota, enjoying a wonderful 57 year marriage. After Wes retired in 1990, he and Carmen became snowbirds and spent many memorable winters in SunBird enjoying golf, shuffleboard, cards and entertaining family and friends. Carmen continued their snowbird tradition after Wes’ death in 2007. Arizona was a special second home to Carmen.

Aside from her first love, her children and grandchildren, Carmen really loved to travel as she, along with family and friends, frequently traveled together both here and abroad. “So where are you going this year, Mom?” was a common question from family. She often told us how truly surprised and pleased she was to think that a little girl from North Dakota could grow up and see so much of the world.

We will greatly miss her smile, sense of humor, and gracious spirit.

At Carmen’s request no services will be held. Condolences can be sent to Carollynn Hanson, 6640 S. Championship Drive, Chandler, AZ 85249.