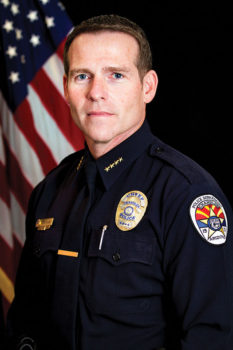 On Tuesday, March 7, Joe Ducey of Channel ABC15 and host of “Let Joe Know” will be the speaker. Joe is a consumer advocate who exposes scams and holds businesses accountable for their contracts and agreements. He concentrates on consumer investigative stories by exposing scams, rip-offs and deals just too good to be true. He’s also interested in big investigations that demand digging to find the answers and bring change.

Joe was honored with a 2013 Peabody Award, one of the industry’s most prestigious investigative journalism awards. He also won a 2013 regional Edward R. Murrow Award. Both awards came after an investigation into a car crash and the death of a 17-year-old Arizona girl. Joe and his team exposed the hidden history of the car involved. It led to a government investigation and the recall of more than 700,000 SUVs by two major carmakers.

Most important, he shares consumer red flags before they hit our wallets! It is these things and more that he will share. This is certain to be a winning presentation.

On Tuesday, March 14, Chief Sean Duggan, Chandler Chief of Police, will address the group. Chief Sean Duggan was appointed as the Chief of Police for the City of Chandler on January 13, 2014, after serving 27 years with the Scottsdale Police Department. He brought with him a wealth of knowledge and experience, having worked assignments in patrol, investigations, SWAT and other specialties at levels from officer to Assistant Chief.

Under Chief Duggan’s leadership, the Chandler Police Department has made great strides towards becoming a world-class leader in 21st Century policing by engaging the best trained, equipped and committed professionals and by employing the best practices in policing. Chandler remains one of the nation’s top ten safest cities with populations over 200,000 residents.

On Tuesday, March 28, Rotarian Norm Noble will present a talk — “Who Are You?” This will be a condensed version of a course he taught for several years at Chandler-Gilbert Community College. Norm contends that EVERYONE should write their autobiography for the sake of their families; families who don’t know as much about them as they think they do. He will give step-by-step suggestions on how to get started and complete the task. Norm is the author of five novels and one non-fiction book. He is Past President of Sun Lakes Rotary Club.

The Rotary Club of Sun Lakes meets for breakfast every Tuesday morning at 6:30 a.m. in the Oakwood Country Club Ballroom. The meetings start at 7:00 a.m. and end promptly at 8:00 a.m. Cost of breakfast is $12. To make reservations for any meeting, contact Rotarian Fred DePrez at 480-892-7499. For Sun Lakes residents, if you want to know more about the club, contact Charles Loew at 602-721-3680. SunBird residents should contact Walt Mills at 480-883-8007. www.sunlakesrotary.com.