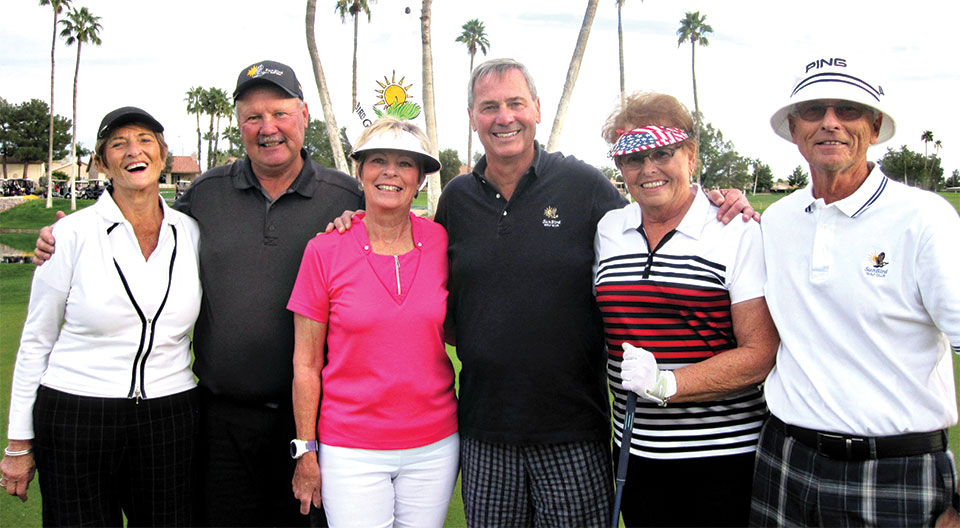 The weather on Sunday, March 5, was not quite typical compared to what one might expect at this time of the year. It was mostly cloudy, a little breezy and somewhat cool, but this didn’t deter 10 couples representing the SunBird Men’s and Ladies’ Golf Associations from teeing it up in the nine-hole couples net score shoot out. The players qualified for the event by having a top 10 net score in the men’s and ladies’ qualifying events. Pairings were determined by the individual ranking of the qualifying scores.

In a couples shoot out, the men always tee off on the odd number holes, while the ladies tee off on the even numbered holes. After the drive, the players play alternate shot into the hole. There is quite a crowd on the first hole, as all 10 couples play the hole. The couple with the highest score on the hole is eliminated. In the case of a tie for the highest score, there is a chip off. The couple with the chip farthest from the hole is eliminated. This continues with one couple being eliminated from the completion on each hole until on hole nine there are only two couples remaining who play for the championship.

The winner of this year’s event was the team of Carolyn Jarvis and Wayne Onyx who had to survive a chip off on the eighth hole to advance. Finishing second and third, respectively, were the couples of Joyce Gerber and Paul Carlson and Nancy Ratermann and Fred Nixon.

The rest of the field, in order of qualifying, were Heather Verbitsky and Gary Whistler, Jen Walden and George Richardson, Dee Lee and Dan Moran, Sue Koslofsky and Ron Jarvis, Trish Carrel and Lew Lepore, Jane Sirois and Don Hunt and Barb Wallace and Bob Gerber.