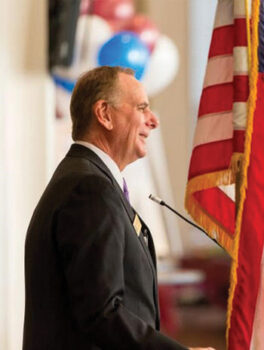 The Chandler Mayor, Kevin Hartke, will be the guest speaker for the National Day of Prayer, Thursday, May 5, at the SunBird Golf Resort ballroom, at 6250 S. SunBird Blvd., in Chandler. The program will begin at 10 a.m. with pre-program patriotic music beginning at 9:30 a.m. This is a communitywide invite. The public is cordially invited to attend.

Mayor Hartke has served on the Chandler City Council for nine years, the last three years as mayor. He is the founder and director of For Our City-Chandler, a humanitarian non-profit that works together with other groups to address the needs of the community. Mr. Hartke serves extensively in state and regional leadership. He serves on various commissions and boards in the community. He also volunteers with several Chandler groups, including serving as an advocate and reader with students at one of the Chandler schools.

Mayor Hartke has a bachelor’s degree in biochemistry from the University of Missouri and a master’s degree in theology from Fuller Theological Seminary.

The program for this event will include patriotic and inspirational music from musicians, soloist Jan Libby, the Cornerstone Men’s Quartet, and soloist Jesse Washington. Keyboard Connection, an ensemble of piano keyboards, will provide the patriotic pre-program music.

There will be individuals from the community to participate in scriptures and prayers, remembering our military, our government, our schools, our businesses, our churches, and our families.

Plan to attend this free special event. SunBird Golf Resort is on the south side of Riggs Road between McQueen and Cooper Roads.