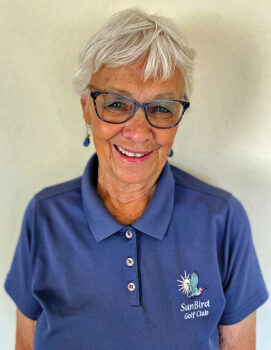 The Giggle Gals Women’s Golf League began Nov. 5, 2009, originally called Giggle and Hits. Marie Dosco, along with her friends Maddie Meyer, Nancy Paolella, and Joanie Freund, began golfing together at SunBird and decided to invite other friends to join them. They began playing on Thursday afternoons, followed by a “very important meeting” held at the Horizon Room. The ladies had such a great time giggling and sharing stories while golfing, that the “Giggle Gals” league was created. Their treasury was very efficient—zero money in, zero money out. The weather captain of the league determined that every day was a great day to golf in Arizona. The group kept growing by word of mouth, friends inviting friends. Scores were kept, and golf rules were followed at times, but the hits and giggles were continuous.

Marie Dosco was instrumental in getting the Giggle Gals golf league started and keeping the group growing strong to the present time. Marie has decided to leave SunBird to move to Canada to be closer to her family. Marie’s smile, humor, and uplifting spirit will be missed by many, but her legacy will continue in SunBird as the Giggle Gals play on.