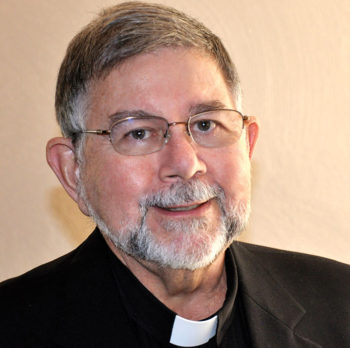 Fr. Leo Paul Pierre Hissey, Pastor of St. Steven’s Roman Catholic Church who recently celebrated his 75th birthday May 27, also celebrated his 50th anniversary of Ordination to the Priesthood June 2. An official celebration was held Friday evening at the Cottonwood Ballroom June 3 with 270 in attendance. During the evening, Father’s 50th anniversary of Priestly Ordination was recognized with an award from Pope Francis which was presented to him. And on Sunday, June 5, after the 11:00 a.m. Mass, a reception was held in his honor by the St. Steven’s community.

A native of Boston, Father Pierre entered the Religious Congregation of the Missionary of the Most Holy Trinity. He attended a French parochial school and entered the seminary while in high school at St. Joseph’s College Prep in Alabama outside Ft. Benning, Georgia, in 1953. After four years of College, majoring in Thomistic Philosophy, interrupted by a year of Novitiate in New York, he then entered Theology in Virginia majoring in Dogma, Scripture, Canon Law and Moral Theology. He was ordained on Thursday, June 2, 1966, at Sacred Heart in Winchester. Fr. Pierre, along with his missionary servant religious priests and brothers, accepted the call and the gift of the priesthood of our Lord Jesus Christ. Part of his commitment was serving the people of God in any capacity both then and in the future. On March 1, 1991 Father received his assignment from His Excellency, The Most Reverend Thomas O’Brien. Of the 32 assignments he was given, he learned to become a servant.

His Excellency, The Most Rev. Thomas J. Olmstead, appointed Fr. Pierre to become our second Pastor of St. Steven’s Roman Catholic Church and presided over Father’s installation on Saturday, February 26, 2005.

We congratulate you, Father Pierre, and we are grateful for your priestly years of service here at St. Steven’s Catholic community.