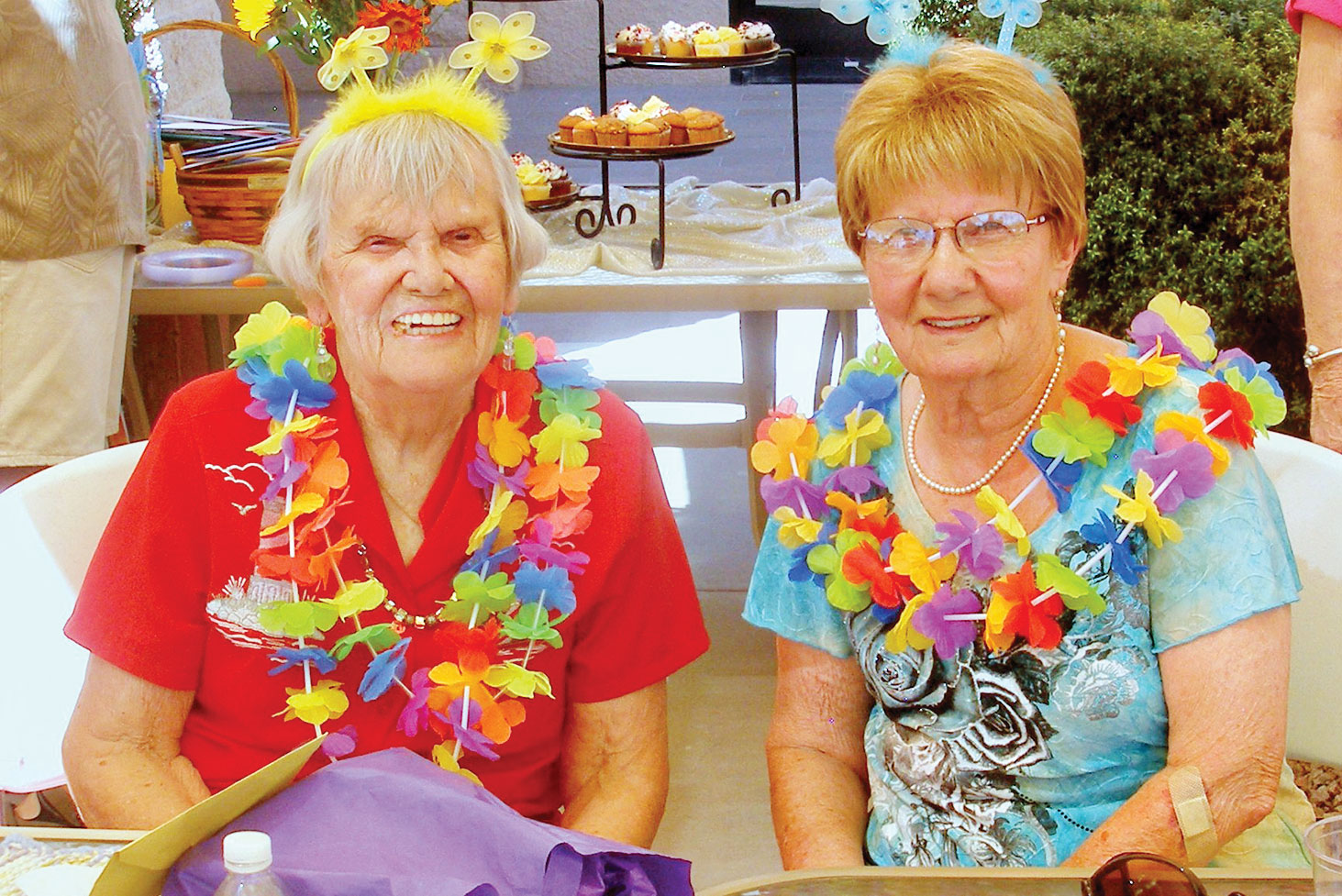 “If you have a friend that’s tried and true, never exchange him for the new.” Author unknown

A picture says a thousand words, it is said. Therefore, the photo says it all. Geri Dejohn and Velda Kuiper, longtime SunBird friends, are celebrating their friendship and 90th birthdays.

It’s been said a person is fortunate if he can count three close friends. I have five long term friends, one whom I’ve known since first grade.

But what exactly is a friend? Is it the same as an acquaintance?

Even the dictionaries are vague on the meaning of friend. They allude to common values and interests, a history with the person and someone who supports and encourages you. Is it someone who commits to your happiness and inspires you? Others think a friend is a good listener, keeps our stress in check, sees we stay humble, forgives, and makes us a better person. What other characteristics can you add? Is the saying, “To keep a friend, be a friend” true?

As we know, SunBird has a history of being a friendly place. Does being friendly constitute being a friend? Are there different levels of friendship?

Loyalty might be a necessary ingredient in a friend. A gentleman whom I taught school with 52 years ago is still a friend. Cancer took our wives in 2013, and he is in the advanced stage of Parkinson’s. However, we make it a point to have breakfast together once a month. This friendship is important to us both.

Recently, I was told by a well-known artist that she and her husband had lived in Germany and were friends with a couple there. His wife is deceased as is her husband. She has written a letter inviting him to visit our country and has not seen him for 25 years. I hope he will.

Can we then surmise that distance and time do not always end friendships?

Noreen Fraser is living with stage four cancer. She is the founder of a non-profit concern for women’s cancer research and has written about her husband.

“My husband lost his best friend today; Hal was the salt of the earth. He was my dear friend, too. He had a wonderful life and lived well into his 90s.

“My husband’s best friend was his father and when he died, it took Woody years to find a friend like Hal. Guys just don’t open up about their feelings, their worries, their financial problems, or their career choices. Generally speaking, men are different than women when it comes to friendships.

“He came to my husband’s life 30 years ago. Hal was non-threatening and giving. For the first time Woody had a friend he could confide in. They tried to have lunch every other week or talk on the phone.”

“When Hal’s wife died of cancer, we could not imagine how he would cope. Later he became very ill. Now it was Woody’s time to give back. They loved each other so much.”

“You might believe your spouse is all you need, but you are wrong. Happiness and quality friendship are important. Friendships make us happy.”

“Maybe a childhood friend, or a college buddy or an army chum is someone out there you miss. Reactivate the friendship.”

While the words “friend and friendship” are abstract and difficult to define, they are very essential for a good life.