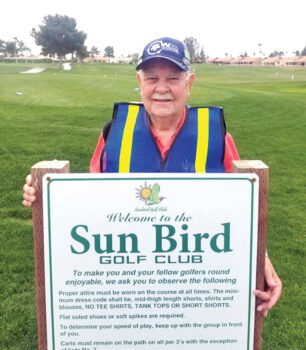 The Waste Management Phoenix Open (WMPO) golf tournament is often billed as “The Greatest Show on Grass.” Each year, the WMPO draws golfers and spectators from around the world during the last week of January. This annual event features seven days of good-natured fun, good food, good weather, and spectacular scenery—all while watching the world’s best professional and amateur golfers.

For 23 years, SunBird resident Gil Knudtson has led groups of volunteers from SunBird (both golfers and non-golfers) to help with security at the Open. WMPO 2020 was no exception, as SunBird sent another large volunteer group to the Open. Gil single handedly coordinates rosters, contact information, schedules, carpools, and security teams, as well as handling the volunteers’ on-site needs at the tournament venue. Under Gil’s leadership, the people at WMPO have always praised the SunBird volunteers for their dedication and flexibility under Gil’s leadership.

We honor Gil and thank him for his many invaluable contributions.

The SunBird WMPO Volunteer tradition will continue. For WMPO 2021, Gil is passing the baton to a volunteer committee that will perform those functions going forward.

There will be more information about continuing this SunBird tradition in the SunBird News (print version and online version) as the year progresses. Stay tuned. But in the meantime, feel free to contact Barry Lieberman at [email protected] or 916-300-5159 if you would like to know more about it.

Please note: As of mid-August, it was not clear that the Open will go forward in 2021 the way it has in past years. At this point, things may remain uncertain until late in October. Please “stay tuned.” Follow your SunBird News and updates for additional information during the coming weeks and months. Thank you!