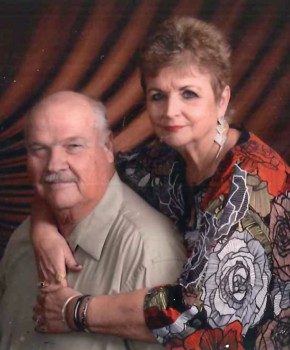 With his six brothers and sister, a young boy lived on a farm in Arcadia, Oklahoma, a town even now with 247 people. At the same time, a young girl was maturing in California and would eventually play an important part in the boy’s life. Like his relatives, Jodie Perkins learned to play the guitar.

Graduating from high school, he joined the army in 1966 and was trained as a field medic at Fort Sam Huston (TX). In 1967 he was on the front lines of a blazing war in Viet Nam where he tended and removed the wounded. He was honorably discharged in 1969 with an E-5 rank.

The same year, the young lady from California came to Oklahoma to visit an aunt who knew of Jodie. She suggested that BettiSue contact Jodie, and she did. Jodie thought, “Who is this beautiful girl?” Something clicked and the couple was married in 1970. They have a daughter and two grandchildren.

BettiSue’s father was a minister, and the family lived in Los Angeles and the San Diego areas. At age 12, she was playing piano for the church. She graduated from high school and later from the University of Central Oklahoma with BA degree. A successful real estate career of 31 years followed. Periodically she returns to California and a still owned former house to tend 35 rose bushes her dad once gave to her mother.

“I always wanted to be in police work,” said Jodie.” In 1970 he began a successful 31 years with the Oklahoma City Police Department. During that time he was promoted to detective in the Robbery and Homicide detail; promoted to sergeant in Assault Detail; promoted to lieutenant and assigned to the Patrol Division; became Internal Affairs Supervisor; and retired from the Oklahoma City Police Department in 2001 after receiving many commendations for excellent work.

In April 1995 terrorists bombed the Oklahoma City Federal Building, killing 168 people and injuring many more. Jodie was responsible for the entire north side. A well-known journalist attempted three times to enter the building, the third by stealing a fireman’s coat and hat. Jodie arrested him and took him to jail that man was Geraldo Rivera.

Since 2001 Jodie has been a contract aviation security officer in the U.S. Marshall Service. One responsibility is returning illegal immigrants to their countries.

BettiSue, an excellent pianist, plays for the SunBird Community Church and with Jodie has performed in many SunBird productions. He is also in charge of the veterans’ program and BettiSue served on the SunBird governing board for nine years.

She enjoys reading, writing, music and bargains at Goodwill. Jodie likes to hunt squirrels and play and write music. He has also found time to gain a college BS degree in Sociology. When asked about travels, Jodie replied, “Everywhere.”