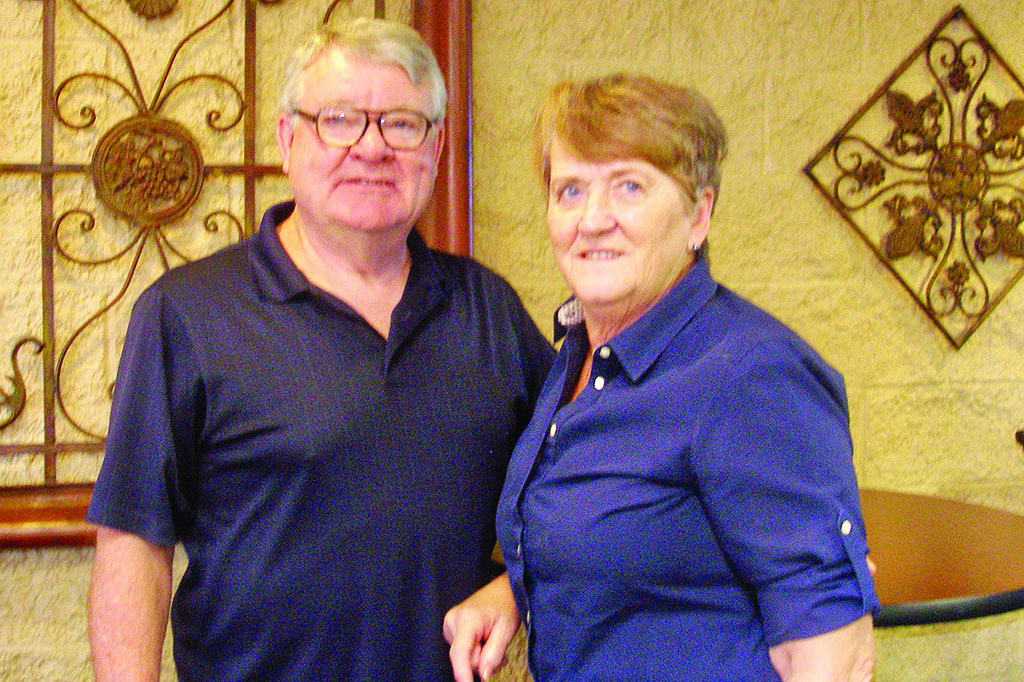 This interesting, active and delightful couple spent several years avoiding Midwest winters by renting in Sun Lakes. After a couple more in SunBird, they decided to purchase a home. The house required some work, but so what? Marlene is an interior decorator who once had her own shop. Their house is now a beauty.

On November 25 Curt and Marlene Almlie celebrated their 49th wedding anniversary. “I had only a 20 year warranty on her, but she is still here” joked Curt. Three children and five grandchildren add to their enjoyment.

Curt is grateful for having grown up in a small town and attending a country school where he excelled in football as a running back. He continued this sport at Mayville State University in North Dakota, eventually playing semi-pro football for the Sheboygan Redwings. Rewarded for his expertise, he was voted most valuable offensive player while there. Then too, he is a member of the Mayville State University Athletic Hall of Fame. Another memento from his playing days is the metal plate in his neck. “It had six screws, but three are now broken,” he declared.

Marlene taught three years in junior high after graduating from North Dakota State University. Other careers were Director of Fargo/Moorhead YWCA, Crookston, MN Foundation Director, Director of a health center and Consultant for a design studio. Another she views as worthwhile is Development Director for ND Dollars for Scholars, a foundation that aids college scholars with funds.

Fortunately, the two have similar tastes. They like golf, socializing, music and movies. “We also enjoy variety shows and sometimes a good dance. On our bucket list is a river cruise or two” said Marlene. Curt, a WW II history buff, dreams of going to Normandy. They have traveled throughout the US, Europe and South America and lived in Wisconsin, Minnesota and North Dakota.

Marlene states, “I have never had a job I didn’t like, and I took many opportunities to make meaningful job changes. I still enjoy working part time floral landscaping design and window treatment sales in Minnesota lake areas during the summer and fall months.”

Marlene and Curt commented favorably about the new swimming pool and both have gotten their feet wet. SunBird is high on their favorable list because of its friendly residents and many amenities. These items were a major factor in locating here. “People wave at you here. We have lived places where we never even knew our neighbors,” said Curt.

SunBird is fortunate to have extraordinary residents and now you can add Marlene and Curt Almlie to the list.