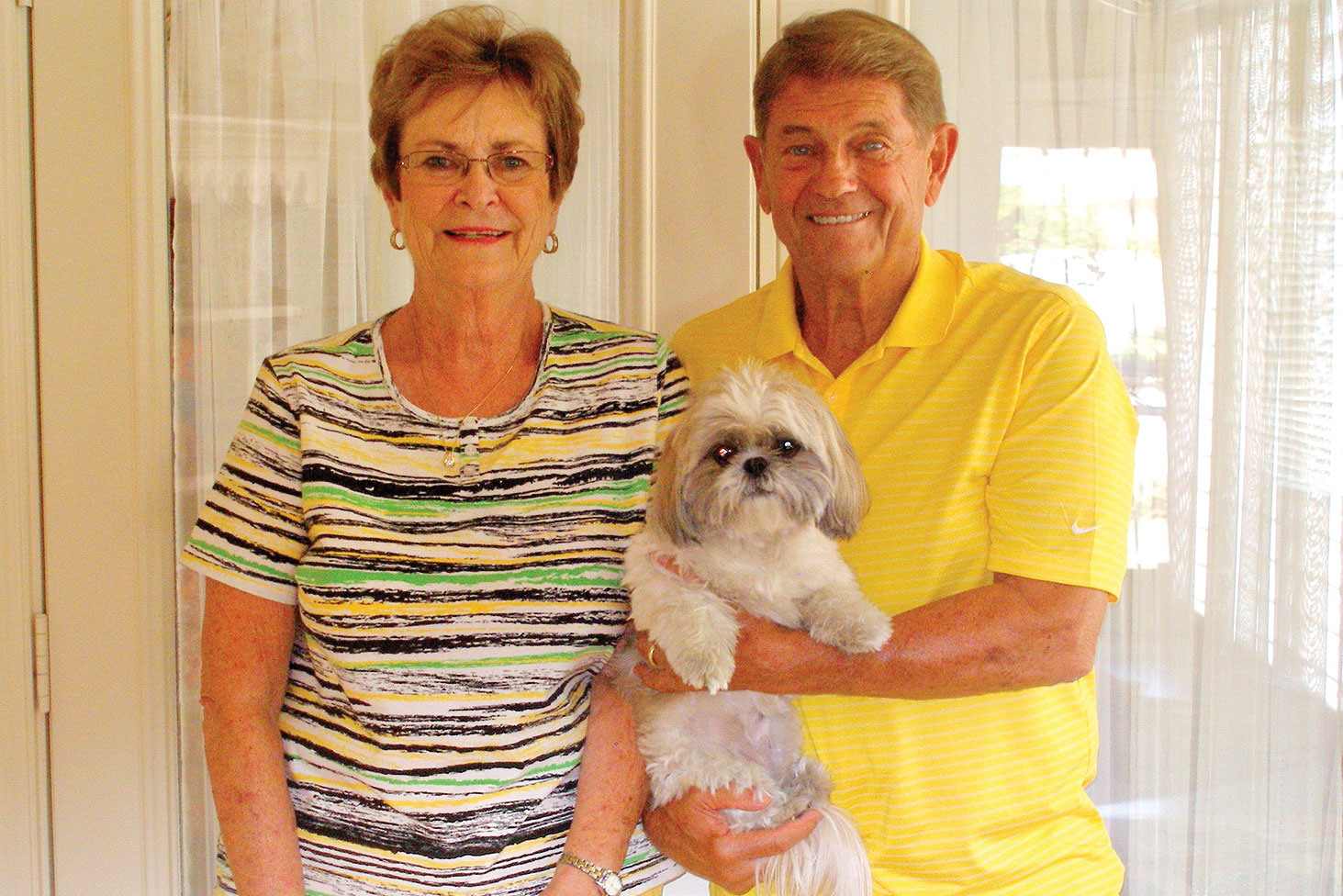 Pat and Jerry Younger with their guard dog Abby

For 12 years, Pat and Jerry Younger traveled back and forth from their Omaha home to winter in SunBird, but last fall things changed.

As Pat related, “We moved to SunBird in 2014 because we love the people and needed to get down to one home. Winter temps are wonderful, but I am not sure yet about summer. I had been in Nebraska all my life, so his was a big move!”

They purchased Elmer and Ethel Crohn’s former home. Friends of the Crohns may recall that Elmer greatly enlarged the house and Pat and Jerry have continued to enhance it.

“We had lockers next to each other in junior high. She was 13 and I was 16. Our first date was dinner and a chaperoned school dance. We dated for eight or nine years,” recalled Jerry.

Jerry grew up with his brother and sister. His dad worked with heavy equipment building highways; therefore, the family traveled extensively. “Before graduating, I had been in 23 different schools, sometimes not long enough to complete a grade.” This meant repeating the grade sometimes at the next stop.

Taking advanced courses appropriate for his Teamster work occupation Jerry, later went to work for Teamsters in Omaha as a business agent and officer for 28 years. He was then elected trustee for Teamster employees’ health, welfare and pension funds in central states which meant more traveling through Kansas, Nebraska and South Dakota.

After high school graduation, Pat entered St. Francis School and became an adept radiological technologist working in hospitals and clinics in Grand Island and Omaha. She retired in 2001 after 19 years of supervising numerous nursing clinics in the Methodist health system.

They married August 15, 1963 and will celebrate their 52nd anniversary – which at one point in the marriage seemed destined never to be.

Jerry has a penchant for his Harley motorcycle and for many years has ridden solo or sometimes with other enthusiasts. His Harley has taken him through 36 of the states. When asked if she accompanied, Pat gave a very emphatic “no.”

At age 72, while on the road through Durango, Colorado, he hit a deer and slid 262 feet on the pavement, tearing up lots of skin and causing several broken bones. Jerry’s less dangerous hobbies are golf, water volleyball and table pool.

Pat enjoys some bridge, water aerobics, reading and especially quilting. She will leave in the fall for a Nebraska quilt camp to join with friends and do quilting.

They have traveled extensively. In 2000, Pat and daughter went to Italy. Counting both work and pleasure, the couple have visited numerous states including Hawaii. They will head for Nebraska soon to visit their daughter and spouse (Susan and Travis) and other friends.

Abby, their active Shih Tzu, serves as guard to keep the bad guys away.

Pat said, “Our daughter told us to ‘Go have fun!’ so that’s what we’re doing.” It certainly appears that way.