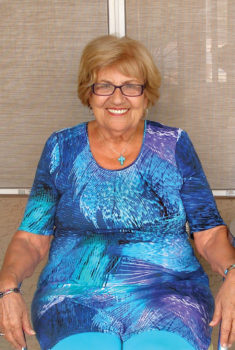 This young-at-heart lady has the energy of a teenager. One clue, however, she graduated high school in 1950 and has never slowed down since.

A spark later on hit when she met Jim, her future husband, at a North Dakota church event. Soon her name was changed to Dolores Kline. This was the beginning of many adventures.

Her father was a farmer but had numerous jobs, such as an auctioneer and member of the North Dakota state House.

His cousin, who became famous with an accordion and later as a band leader, lived nearby. His name was Lawrence Welk.

Her mother, relying on German language, never learned English. Besides Dolores, there were four sisters and one brother. All attended a country school.

Primarily German, the farmers would help each with crops, etc. “They worked steadily until the task was complete, barely stopping for lunch. I was amazed at the Norwegian farmers who did the same but in a slower and unworried way. They would stop work at noon and go to the house for a leisurely meal,” Dolores recalled.

Later she taught in a country school before she had a teaching license. She later graduated with a college BA degree in Elementary Teaching. “I taught 17 years in many places that included North Dakota, Illinois, Minnesota and California.”

Her current occupation is a Benefit Counselor on call and reports to Unum and Cigna insurance companies.

Do you recall a drink named Orange Julius? Her husband’s business took them to southern California from 1974 to 2013.

While there, Dolores was Director of Religion Education at St. Jude Catholic Church in West Lake Village, California.

Her husband Jim passed away in August of 2012. Having been in the United States Air Force during the Korean War, he is buried in the Veteran Cemetery in Cave Creek, Arizona. She does now have a daughter who is a Chicago attorney and another who is a teacher and resides in Gilbert, Arizona. There are, in addition, two grandchildren.

Visiting her Arizona daughter helped her decide to settle here. A lady realtor showed her homes in Mesa and Sun Lakes. Neither place was satisfactory, so they centered on SunBird. “In January of 2013, I moved for the purpose of being near family. I feel so blessed to live in SunBird with the warmth of the environment and the compatibility of its people.”

Dolores attends and is co-chair of the German Club. She thoroughly enjoys this and invites anyone with German connections to come join.

She also is a fervent bridge player each Friday. Other interests are scrapbooking, genealogy and board games.

Living in several states, her travel philosophy is to see as much as possible in the state she resides. She does, however, return to North Dakota.

Meet this vivacious and interesting lady and, chances are, you will never forget her.