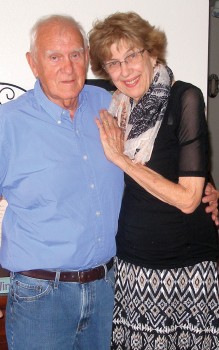 A long time ago, in Albany, New York, a group of high school cheerleaders walked into a café where a partition divided it from the bar where some uniformed soldiers sat. One of the girls asked Elizabeth to go into the bar to have a look, but dissuaded by the rest, she merely stood on a chair and peered over the barrier, waving and calling to them. Noticing this performance, one of the soldiers remarked to his friend, “I’m going to marry that girl.”

And he did in 1957. On June 15 Elizabeth and Gene Gulliver celebrated their exciting life with a wedding anniversary. Their love story has continued for 58 years.

Both had hard working parents and siblings. Both were successful in their education and work endeavors. Both remain intellectually alert and vibrant.

Elizabeth completed college with a counseling certificate in psychology that led her to developmental disabilities for adults. She was also a social worker for nursing homes and later a director in Chicago of a day care center for adults with Alzheimer’s.

A corporal in the infantry during the Korean War, Gene was stationed in Germany. He holds degrees from Hudson Valley Tech and BSCE Indiana Institute of Technology. These led to an interesting career as a civil engineer. On assignment, he worked in Nigeria where snakes were so prevalent they dropped from the trees. Another assignment was Guatemala. He also managed the Chicago office.

Since retirement in 1996, he has written and published Confederate Farmers, a Civil War book (a copy is in the Chandler library). He has received awards for his short plays, one of which played off Broadway in New York. Gene is also a commentary writer and has been a realtor and script writer for channel 14 at Sun Lakes. At present, he is helping take the census.

If any in SunBird or the vicinity are interested in forming a thespian club, contact Gene at 480-895-5117.

Gulliver’s Travels: There have been excursions to France and Italy. At various times they have lived in New York, Pennsylvania, Chicago and Boca Raton, FL. While in Florida, Gene was one of the ballot counters in the disputed election of George W. Bush when the election hinged on the Florida votes in 2000.

Their main concentration is their family. Elizabeth comments, “My interest at this stage of my life is my grandchildren. They all have a unique place in my heart.”

Living in Wisconsin, son Gene, Jr. is a cardiologist. His spouse, Melissa, is a nurse. Jessica is in medical school with her brother, Jon soon to follow. Becca is in college while Alexander and Bella attend grade school. All are excellent students.

Daughter Stephanie is a nurse; Jeff is a urologist. Two daughters, Lauren and Clara, excel in grade school.

Both Elizabeth and Gene concur that, “Sometimes it’s been a wild ride, but it can’t be any better than this.”