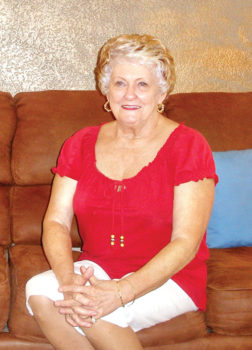 Although SunBird has abundant tourists and residents from places like Minnesota, Washington, Oregon and the Dakotas, just a few New Yorkers overlook Florida to retire at SunBird.

This charming lady and her husband not only had the fortitude but the good sense to select the best place on earth for their retirement.

Jan Benincasa, an achiever and a survivor, was born in Buffalo, New York, during the early years of WW II. She had three sisters, one a twin, and two brothers. Before she was 14, she had survived pneumonia 21 times and missed many school days.

In high school, she was on the girls’ basketball team and did well in math. She dreamed of becoming an attorney, but there was no money for college.

She did have an interest in cutting and styling hair. When only four she would walk into town to watch the salon workers through the window. “I would stand there for hours,” she said. She was cutting hair for others at age 12. Formal cosmetology learning was followed by advanced training later. Jan had her own shops, including 21 years in Mesa, 56 years in all.

A second marriage for both occurred in 1984. Her husband was a Korean War Navy veteran. There were nine children and later 18 grandchildren and 12 great grandkids.

While enjoying SunBird living, her spouse died suddenly on April 5, 2008, two weeks from their 22nd anniversary. Devastated and unprepared, Jan experienced a very difficult time, eventually leaving her home with its sad memories and relocating to the present one on Palm Beach.

Besides the weather, Jan likes to cook, specifically a special diet which has energized her greatly. Quilting, sewing and working out are other interests. “Having not golfed for some time, I bought a second hand cart and intended to start again, but I have not played once yet.”

She travels to visit a sister in New Mexico and back to New York regularly where many relatives still live. In addition, she has been to Italy, Spain, the Caribbean and Puerto Vallarta. She commented, “I’m glad I did my traveling in my younger years as my traveling days are over.”

“I have been an American Legion auxiliary member for 43 years. When I retire, I hope to volunteer to be some help to our veterans. God bless each and every one of them.”

Life for Jan, like many others, has not always gone smoothly, but she has been blessed with a family, success in her occupation, and living in the sunshine surrounded by friendly people.

Wildcat a Broadway musical show, contained the popular Hey, Look Me Over, a song that has a line “Whenever you’re down and out, the only way is up.” So it goes for Jan Benincasa.