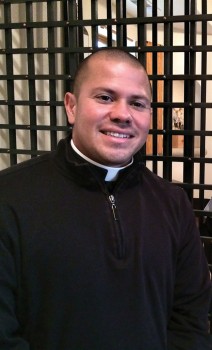 If you want to be inspired, motivated and awed, then plan on attending the Day of Recollection/Retreat being held at St. Steven’s Church in Sun Lakes, Arizona, on Thursday, January 21 from 9:00-11:00 a.m. A luncheon will follow in the St. Steven’s Fitzpatrick Center Great Hall and discussion will continue. This event is opened to all women of the community and there is no fee.

Father Michael Passo was born and raised in Omaha, Nebraska, and he has a twin brother, Gabriel and two sisters who are nuns, Sister Mary Therese and Sister Mary Veronica and three brothers, Andrew, Joseph and Joshua, who is a priest in the FSSP order also. He credits the example of his parents, Michael and Cecilia Passo, his siblings and the priests of the Fraternity with nurturing his spiritual life and later his vocation.

Father Michael had both a parochial school education and home schooling experiences. He began attending with his family the traditional Latin Mass at Saint Patrick in Omaha when he was about 12 years of age. As a teenager, he enrolled in the local high school for the sports program, but was disillusioned by the secular morals and was concerned for his classmates. At that time, the idea of a priestly vocation began to form in his mind.

He entered college and began preparing for a medical career at the University of Nebraska in Omaha and in his senior year, he traveled to Mexico to serve with the Missionary Fathers of Mother Theresa, and it was there that he seriously began to consider the call to the priesthood.

He entered the FSSP seminary in Nebraska and was ordained a priest on June 1, 2013 and was assigned to the FSSP mission in Columbia. On July 20, 2015, Bishop Thomas Olmsted, Bishop of the Diocese of Phoenix, announced the appointment of Reverend Michael Passo, F.S.S.P. as Parochial Vicar of Mater Misericordia Mission, Phoenix, Arizona, effective June 30, 2015.

For information or to make a reservation for this special morning, please call Edie at 480-895-9266, extension 0; e-mail her at [email protected]; or call Anne at 480-802-9127. The Day of Recollection/Retreat is open to all women in the community. An opportunity for a free-will offering will be provided.