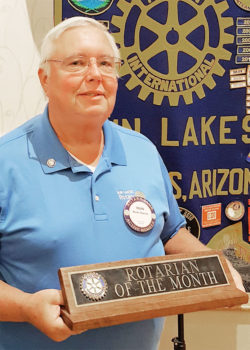 April’s Rotarian of the Month started his journey to Sun Lakes Rotary Club when he and his father joined the local Rotary club in Michigan together.

Mark Stapels graduated from Eastern Michigan University with a speech major and a teaching degree. After graduating from college, he spent five years as a junior high teacher, then real estate and on to his father’s tool manufacturing shop where he discovered his true business love, selling. His eyes light up when he describes how he enjoys meeting people and especially getting to know them. During this time, he married, and he and his wife had four children, and now five grandchildren.

“Brothers Industry” – that’s the name the Stapels boys used as they started up what resulted into a very successful enterprise. Mark oversaw selling, Greg handled manufacturing and David finance. The company grew from five employees to over 200, and another 400 on the outside doing their work. After 26 years, they sold the business, and Mark retired to Arizona to enjoy better weather.

But something was missing from Mark’s life. He needed a job or something where he could hone his selling skills, and yet allow himself an opportunity to help his community. Mark joined the nearly 100 Rotarians at Sun Lakes in their many activities generating funds to continue helping grade school students with dictionaries for third graders, teachers and high school students – whatever is needed in our community.

Which brings us to the recently-concluded Sun Lakes Rotary annual Charity Golf Tournament held at Oakwood CC. As a part of the tournament, a raffle was held for a brand-new golf cart from A-1 Golf Carts. Raffle tickets cost $10 apiece, and Mark sold more than 600 all by himself. Think of it – 600 raffle tickets! Good fit for a salesman, don’t you think? Mark says that he had a Rotarian friend, Bill Crump, who helped him, but the lion’s worth was all him. That’s a lot of tickets. That’s a Rotarian worthy of Rotarian of the Month.