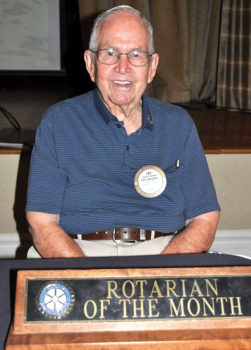 Longtime key member of the Sun Lakes Rotary Club, Leland D. Widener was chosen Rotarian of the Month (November). Lee has held almost every service position in the club since joining in 1990, including secretary and president, as well as chair of several committees. He is a Paul Harris Fellow/Benefactor, served as Rotary District 5510 Assistant Governor, and in 2001 was named Rotarian of the Year for the club. Club President Bill McCoach said, “If a job needs doing, and Lee is able, he does it.” Throughout his professional career, Lee was in insurance sales, retiring from State Farm in 1990. He and his wife Nancy have seven children, 12 grandchildren, and 12 great-grandchildren. They (not the kids, the Wideners) reside in Oakwood.