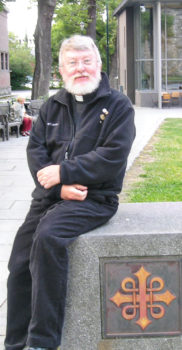 The Scandinavian Club of the Southeast Valley will hold its first meeting of 2019 on January 20 at the Sun Lakes Country Club. Friendship hour begins at 5:00 p.m. with pickled herring, cheese and crackers. Dinner will be served at 6:00 p.m., followed by the evening’s program at 7:00 p.m. Pastor Keith E.O. Homstad of Northfield, MN, will present an interesting and informative program on the Pilgrim’s Way in Norway, a path which leads from Oslo northwest to Trondheim on the Atlantic coast – a distance of some 643 km. Wearing some of the garb worn by ancient Pilgrims, he will tell about their protected status in Medieval Norway and most of Christendom. The well-marked trail, which has been largely restored, winds through wildly scenic countryside in Southern, Central and North Central Norway. With so much dramatic scenery, one may wonder why our ancestors left such a beautiful country. Homstad will talk about some of the conditions that prompted the immigration to America, as well as the folklore, sagas, legends, Christian history of Norway and its patron saint, St. King Olav, “Norges Evige Konge” (Norway’s Eternal King). There will be time for questions following the presentation.

Pastor Homstad, BA, MBA, M Div., is a retired ordained pastor of the ELCA (Evangelical Lutheran Church in America), as well as an active preacher, presider and enthusiastic writer (painter) of Byzantine style Christian icons. He has walked portions of the Pilgrim’s Trail over the course of five pilgrimages, including one that originated in Sweden and terminated at Styklestad, where St. Olav was martyred in 1030 A.D. Homstad has studied with Ukrainian, Russian and Syrian Antiochan master iconographers and has produced over 130 icons in his Holy Trinity Icon Studio in Minnesota.

The Scandinavian Club welcome everyone to enjoy the evening – you needn’t be Scandinavian to attend. Dinners are $15 for members and $20 for non-members, and reservations must be made by January 15. To make a reservation, contact Jerry Johnson via email at [email protected] or by calling him at 612-817-9670. If you make a reservation and are unable to attend, we appreciate receiving your payment as the club is charged for your dinner.

Christmas is a time when people are reminded of those less fortunate and often contribute to those in need. However, the needs continue after the holidays. Thus, we will be collecting non-perishable food items for the Chandler food shelf at the meeting. Thank you in advance for your contribution.