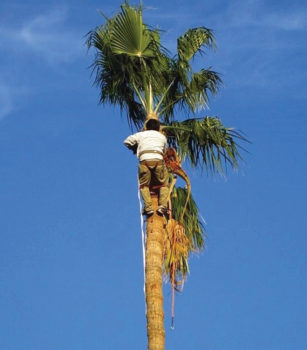 The golf course palm trees were trimmed starting July 15. We have over 215 palm trees and pay over $6,000 each year to trim them. 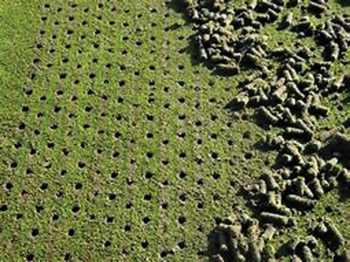 Aerification began July 13 on the front nine greens and July 14 on the back nine greens.

The golf course palm trees were trimmed starting July 15. We have over 215 palm trees and pay over $6,000 each year to trim them.

Aerification began July 13 on the front nine greens and July 14 on the back nine greens. Please be patient as we make our greens better than ever before.

“Aerification” is a mechanical process that creates more air space in the soil and promotes deeper rooting, thus helping the grass plants stay healthy. In most cases, it’s done by removing half-inch cores (those plugs you sometimes see near a green or in fairways) from the compacted soil, allowing for an infusion of air and water that brings a resurgence of growth. The spaces are then filled with sand “topdressing” that helps the soil retain air space and makes it easier for roots to grow downward.

Older greens often were constructed of soils with significant amounts of silt, clay, and fine organic particles that are prone to compaction. Filling aerification holes with sand improves drainage and resists compaction. The periodic introduction of sand to a green’s top layer can, over time, avoid or postpone expensive rebuilding or renovation of greens.

Finally, growing of turf adds to a layer of organic matter on the surface. This layer, called thatch, is an accumulation of dead stems, leaves, and roots. A little organic matter makes for a resilient green, but too much invites diseases and insects. Topdressing with sand can prevent thatch buildup, and aerification is one of the best ways to reduce an existing layer and prevent an excess of thatch from becoming established.

There are many types of aerating machines with different attachments that address different problems in the various stages of the life of a green. So, the next time you are ready to scream when the aerifiers are brought on the course, remember that a little preventative maintenance produces the best greens over the long haul.