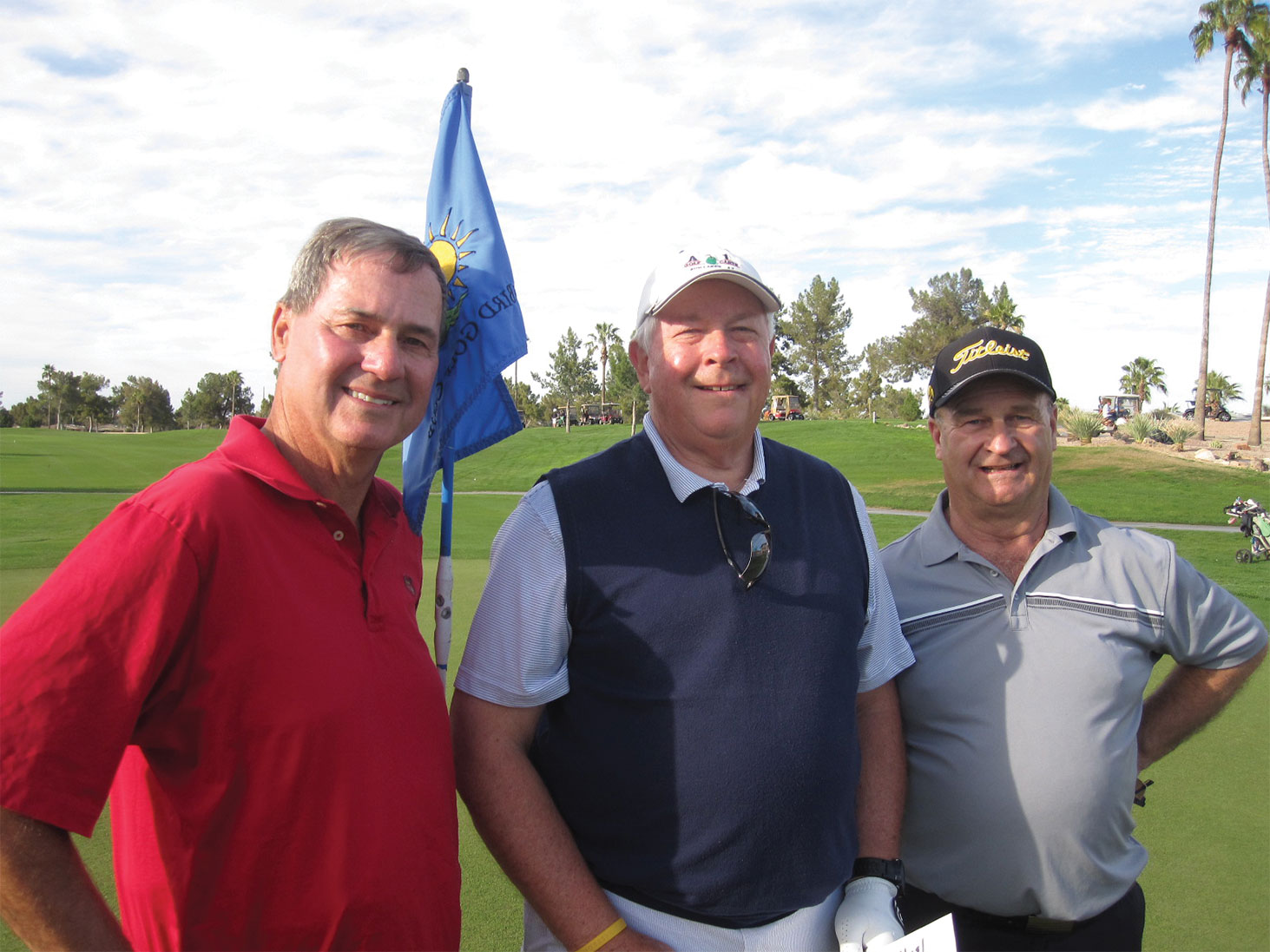 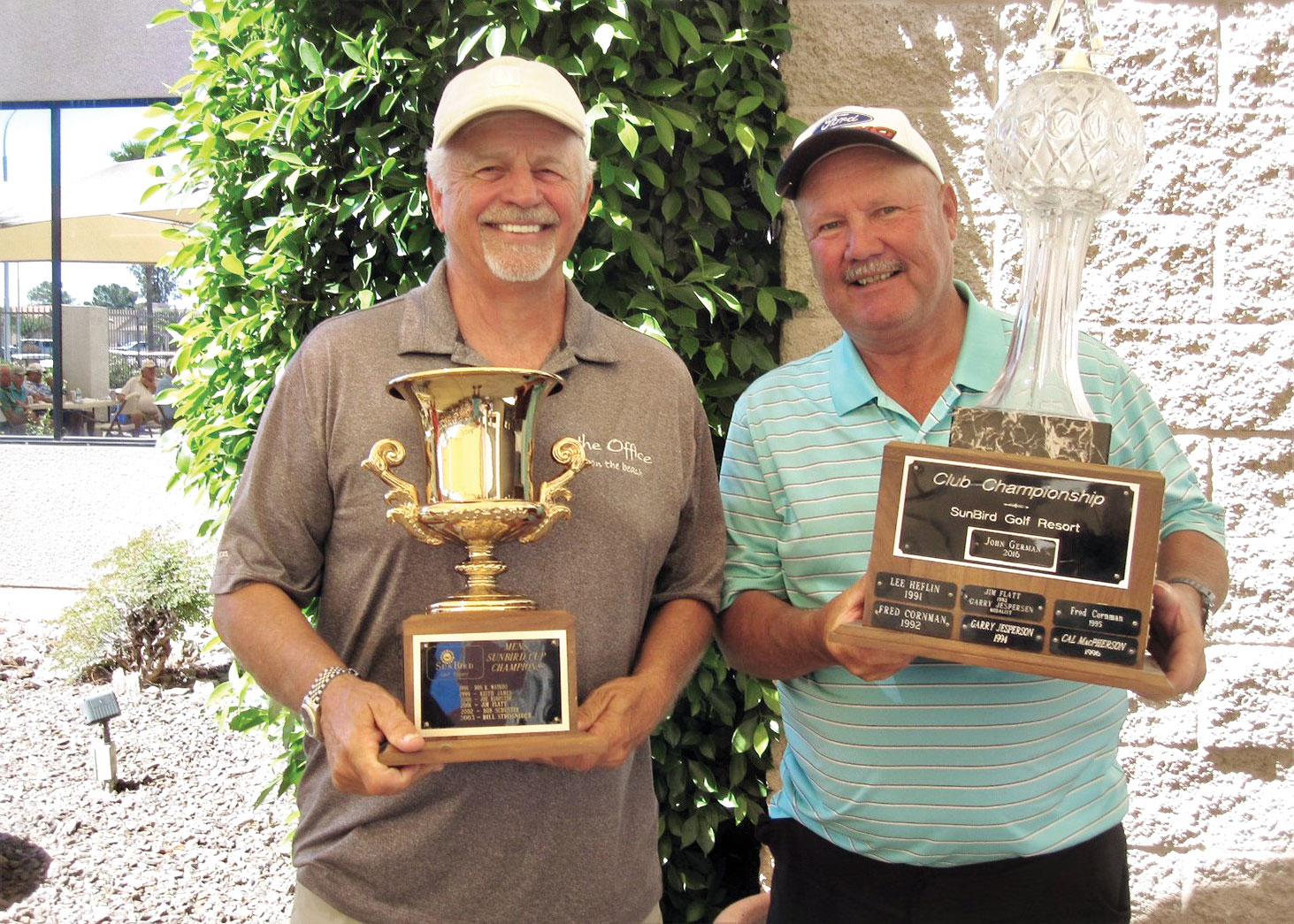 The month of April brought to an end the successful and fun-filled 2018–2019 season. The last executive and business meetings of the season were called to order by Club President Fred Nixon. Gordon Olson was introduced and thanked for volunteering to be the recording secretary for the coming season. Looking ahead, Don Hunt and the tournament committee are working hard on preparing the schedule of events for the 2019–2020 season which will commence with the first business meeting on November 5. In addition to the regular Thursday tournaments, there will be shoot outs, home and homes, match play, the SunBird Cup and the Club Championship. If you are a golfer and would like to participate in competitive but fun golf, you might want to consider joining the club. Players of all skill levels are welcome.

Regular Thursday events in March included the wrap-up of the home and home with Sun Lakes CC on March 7. A low net, two-man Chapman was held on March 14. Flight 1 winner was the team of Don Hunt and Greg Smith with a score of 52. The teams of Vince Budinas/Earl Ferguson and Bill Barkley/Duane Dub in Flight 2 tied at 55. March 21 saw the field divided into four flights in a stroke/net competition. Gross flight winners, respectively, were Jack Cooper, 68; Dave White, 60; Howard Anderson, 70 and Earl Ferguson, 79. There were several ties in the net flights. Gerry Tomlinson, Eric Gossling and Wayne Onyx, 63 in the Flight 1, Dave White, 58 in 2, Howard Anderson, 56 in 3 and Don Friesen and Earl Ferguson at 58 in the final flight.

March 28 saw the annual Men’s and Ladies’ combined step aside scramble and patio awards lunch. A field of 27 combined foursomes, 108 men and women, teed it up for this fun-filled event. Two teams finished in a tie for first place with scores of 57. They were Dale Stokke, Duane Dub, Jackie Huyghebaert and Sue Fargo and Jack Cooper, Lew Lepore, Laverne Schaffer and Sandy Muyres. Following the play, a lunch provided by the Horizon Room was served and the Men’s and Ladies’ annual awards were presented. On the men’s side, the major champions, Ron Jackson, SunBird Cup, and Fred Nixon, Club Championship, were presented their trophies.

On March 10, the Men’s Gross Shootout was held. A total of 10 of the club’s lowest handicap golfers teed it up for this event. The survivors in this elimination event were third place Dean Huyghebaert, second place Wayne Onyx and Champion Jack Cooper.

The final special event of the month was the MacPherson Match Play Challenge. Twenty-eight qualifiers were divided into two teams for this three-day event which is similar in format to the pro Ryder Cup. The Challenger Team beat the namesake MacPherson team 16.5 points to 11.5 points.