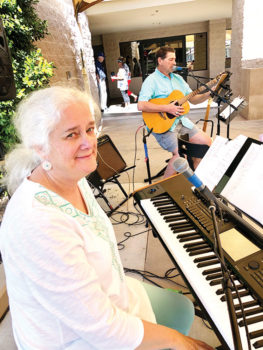 Kim and Mike Hanson share their musical talent as two of three directors of the SunBird Singers and Ringers. An audience member said, “I enjoyed this concert more than any I’ve ever attended!” Here they entertain on the patio. They also assist with the SunBird Community Church. 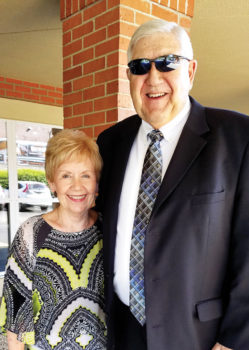 Pat Miller, the third director of the SunBird Singers and Ringers, with her husband Hank Miller following a SunBird Community Church service. She leads the choir, and Hank rotates as a speaker at services with four other ministers.

When we social distance and remember days of ease, we remember the wonderful winter at SunBird and a wonderful evening of music!

The spring concert! Who was the energetic woman with the full, long, white hair directing the near-perfect SunBird Singers’ performances in March? Who could coordinate and guide the talents of 70 singers, four accompanists, 13 bell ringers, and a board of nine? And accompany them on the piano, too!

And who was the tall, quiet guitar player who moved effortlessly between the bass, guitar, and a variety of percussion instruments? These two musicians have the same last name—yes, they’ve been married 35 years. Kim and Mike Hanson lead the group with their talented co-director Pat Miller, a retired music educator from Hamilton, Ohio. They work with a board, including President Chuck Heitbrink, and many volunteers. “They’re wonderful—the amount of help from volunteers is pretty incredible,” says Mike.

This year’s performance theme, “Home,” featured songs such as “This Land is Your Land,” Hallelujah,” and “Thank You For Being A Friend” and slides from the performers in their home states. Kim and Mike traveled to some of these performers’ homes last summer. “This was my favorite concert ever,” said an audience member after the first concert. “I’m calling friends, family, and neighbors to encourage them to come tomorrow. I’m coming to the second one, too, if my other commitments finish early.”

“We all have so much fun,” says Mike. The fun and satisfaction must be contagious for so many seniors to schedule their activities and retirement around practice every Monday afternoon during the winter months. “We’re like a family,” says Pat. We stay in touch by email all year. Last summer, the Hansons traveled to several performers’ distant homes, and many performers’ photos were projected above the stage during the performance.

Surely such commitment and organizational skills followed lifetime careers in professional music. But although both Hansons met while elementary music teachers, they had been away from it for 25 years. Both were vocal music instructors at different schools when they met at a national music convention in Portland, Oregon. The daughter of two music teachers, Kim had a classical music background, traveling to countries with choirs during high school and college. Mike says he was just a guy playing in rock and roll bands since he was 13. They married in 1985, and in time, Kim became a principal and Mike became a school counselor, neither involved in music. After 30-plus years in education, they retired near Tacoma, Wash.

They bought a home in SunBird eight years ago and then moved to a bigger house to fit the baby grand, 16 guitars, a Kronos keyboard, and numerous other instruments (Hanson’s Hacienda de Musica), where they play music with SunBird musicians, as well as their bands.

In addition to directing the choir, Kim and Mike have performed at SunBird block parties and HOA patio parties. Mike and Kim sing and play in the Arizona Cowboys, a band based in Florence. Mike also plays in a four-piece band, The 60s Guys.

In the summer when the winter concert preparation is over, both play occasionally at our church, and Kim enjoys quilting, and they visit their two children and new grandchild.

We look forward to next winter with sunshine, more freedom, and more great music! And like a song from the Singers’ program, Kim, Mike, and Pat, “Thank you for being (our) friend.”