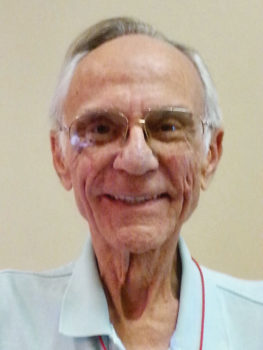 New Adventures in Learning, a lifelong-learning program, elected officers for 2018 at its Annual Meeting of the Membership. Wayne Wright will continue as president for the next year. Bill Haskell, as president-elect, will become president in 2019. Lita Swanson, who has been secretary since 2011, will remain for the next two years. Les Clark takes on the job of treasurer.

Wayne Wright begins a conversation in which the officers share a little about themselves and their work with the group. He describes growing up in a home filled with books and magazines. “From those,” he says, “I developed an appreciation of the vastness of the world and cultures.” As president of the Governing Council, he explains, “We are an all-volunteer program. I am so thankful for all those who have given their time. In its three semesters, New Adventures arranges about 200 classes every year on such a large variety of topics that everyone should be able to find something of interest. Since all members have unique experiences and knowledge, we also encourage imparting these by presenting a class.”

Bill Haskell retired in 1999 from a Midwest gas utility where he had been director of I/T. He and his wife moved to Chandler in 2010 to be near family. As president-elect he has four goals: To expand membership from surrounding communities, to increase volunteerism in support of New Adventures’ activities, to increase opportunities for more social interactions and to implement a new online member registration system.

Lita Swanson was born and raised on Guam, then moved to Washington State to attend Gonzaga University. She and her husband Doug celebrated their 40th anniversary this past November. With two grown daughters in Seattle, they go back to Washington in the summer. Lita reveals, “I found out about New Adventures when I discovered that the Council needed a secretary. I said I could do it even before I joined or took any classes.”

Lester Clark, treasurer, graduated from Missouri State with a degree in economics and geography and spent much of his career involved in local government in the western states. He retired twice, once in California and again in Oregon

Early registration for spring semester ends on January 12, 2018, and many classes fill by that date. However, registration by mail or at the center continues throughout the semester for classes with vacancies. For more information, check www.newadventures.info, call 480-857-5500 or visit the Sun Lakes Center at the corner of Riggs Road and Alma School Road. New Adventures in Learning is affiliated with Chandler-Gilbert Community College. If you are a new member or need to renew your dues this month, the fee will be $25 for the spring and summer semesters both. Add an additional $15 college registration fee each semester you enroll in one class or more.