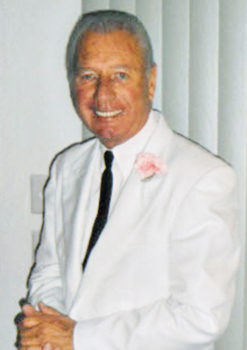 Most of you will remember John for his appearances in Norm Littrel’s productions. John had a beautiful tenor voice and everyone looked forward to hearing him sing. He loved the stage, loved performing, and he was game to try anything. Every show that Michael Leddy, (from Sun Lakes) was in, John was standing right beside him, doing another comedy bit.

John was a great sport! He played everything from the Mexican cowboy, who dropped his pants to show brightly colored boxers to Charlie Chaplin, in full costume and make-up. I always joked with him and said he was a “closet ham,” just waiting to come out.

Evidence of him being a good sport and enjoying “dress up” was Halloween! The first year I knew him, he nonchalantly said he always thought dressing up like “Jack-in-the Box” would be original and fun. However, he could never find anyone to make the head, or should I say anyone stupid enough to make the head. That is, until he met me! That was like someone throwing the gauntlet down before me. We proceeded (together) to construct the “Jack-in-the Box” head, and if we were ever going to test our relationship, it was then. John found his Halloween partner! Most of all the crazy Halloween ideas and costumes we adorned, were John’s ideas. We attended the last SunBird Halloween party as Sun Birds, beaks, feathers and all. Again, John’s idea.

Other residents will remember Friday nights and John singing Karaoke in the Horizon Room. Jamal would always introduce John as T.Z. Tops. I don’t know why, but the two of them thought they were funny and enjoyed it. That’s all that counts.

There’s a group of nearly 75 people who will really miss John’s presence. The people I refer to are the SunBird Singers, SunBird’s Community choir, led by Owen and Joyce Bae. We never have enough tenors and he was a long standing member of the choir, singing his part with confidence and skill. He will be sorely missed.

Of course, we can’t forget the small, but very distinguished group of Water Volley Ball players. John loved to play and he was a regular, until he felt too bad to play.

All who knew John were aware of his intelligence, his long list of accomplishments and numerous degrees of higher learning. In fact, many of us gave him the title of “Perpetual Student.” He used to laugh and say it was the only thing he was really good at. Of course, nothing could be further from the truth. People were amazed when John, in his late 60s, went back to school to study Theology, in an accelerated Master’s program at St. Andrew’s Theological College and Seminary. At the age of 70 years old, John was ordained as Chaplin, assisting in one of the local hospitals.

Yes, his credentials were impressive, but SunBird will remember and miss John Hornak for the things I wrote about.

I miss you, John, for everything, plus the many moments, that you and I only shared together. I love you and my life will never be the same without you. Save a place for me John; I’ll meet you on the other side.

A Celebration of Life Tribute for John Hornak is scheduled for Saturday, November 5, 2016; details to follow.