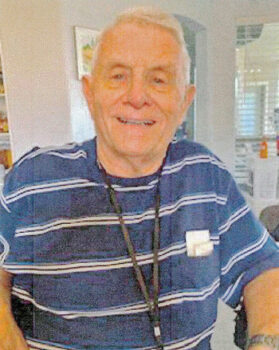 James David Roehl entered into eternal rest on Sept. 18, 2021, at the age of 84. His loving wife Barbara preceded him in death in 2020. James’ legacy lives on through his three sons: Gordon, Kevin, and Dennis; five grandchildren: Jack, Asher, Sofia, Evangeline, Charli; and his sister Marilyn, all of whom survive him.

James was born on Oct. 11, 1936, in Pontiac, Mich., to William Walter Roehl and Gladys Louise Roehl. James was an identical twin. His brother Joe passed away in 2010.

In 1954 he quit 11th grade to join the Navy where he got his GED. As a yeoman in the Navy, James served his country with honor.

He enjoyed coaching and umpiring softball, football, and basketball. He was a very skilled chess player, loved to spend time with his grandchildren, travel, and was an avid reader. He loved worshipping the Lord and fellowship with his family and brothers and sisters in Christ. James was a very sweet and gentle soul, generous in all ways, and a very faithful prayer warrior. James lit up a room when he entered. He was truly a Godly man who, throughout his entire life, had an unwavering faith in Christ, which he shared with his children, grandchildren, and all those around him.