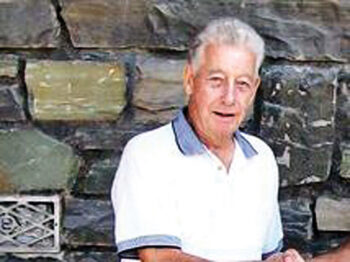 Van Christman, age 97, longtime resident of Bellevue, Wash., and later Summit Lake, Wash., and most recently Chandler, Ariz., went to be with the Lord on Feb. 26, 2021.

Van was born to Elmer and Bertha Christman on April 1, 1924, in Renton, Wash. He attended Panther Lake School and graduated at Renton High School in 1942. He joined the U.S. Army in 1943, serving four-plus years and was part of World War II operations in the European theater. Shortly after being honorably discharged, he met his lifelong soulmate Mary Louise Green, and together they started their family the following year with twins, a daughter Judy and a son Jed, all while starting a new job, for a short period of time, at the Armour Meat Packing plant in Seattle. Eventually, he went to work for the General Electric Company where he worked for 38 years, starting out in the warehouse at 60 cents an hour. Van retired from GE in 1985 in the position of contract sales for the entire Western region.

He was active in the Lions Club and the Masons.

Upon retiring, Van and Mary moved to their beautiful lake home on Summit Lake outside of Olympia, Wash., soon becoming snowbirds, spending their winters in Chandler, Ariz.

Van and Mary purchased their first villa in SunBird in the late 1980s, eventually selling their lake home and becoming full-time residents in SunBird in 2004 where they both became active in the SunBird Community Church, the community German Club, the Lions Club, and many other community activities, including the SunBird Men’s Golf League (Van liked the idea of golfing year-round).

Some of Van’s most memorable events were meeting three different Presidents: Truman, Eisenhower, and Reagan; sailing to England on the Queen Mary; and most recently, his World War II Veterans Honor Flight to Washington, D.C., in the Fall of 2016 with his son Jed and a group of World War II vets.

Van enjoyed traveling, gardening, fishing, sports, and especially golf. His love for golf showed, having had five hole-in-ones. His motto was, “drive for show/putt for dough,” and his handicap reflected that. His short game was deadly.

He was a devoted husband, father, and grandfather. He was preceded in death by his parents, a twin brother Jed, 10 other siblings, and his wife of 60 years, Mary.

Van is survived by his daughter Judy Cockrell and her husband Steve of Battle Ground, Wash.; a son Jed Christman of Priest River, Idaho; and grandson Andrew Cockrell of Camas, Wash.

The family plans a Celebration of Life gathering with family and friends at Summit Lake mid-summer of 2021.

Her most enjoyable pastime was singing in the church choir, which she did for 40 years, first at St. Jude Catholic Church and then at Christ on the Mountain Church, both in Lakewood, Colo.

Carolyn and Bob purchased a winter home in 1998 at SunBird Golf Resort in Chandler, Ariz., and began spending their winter months there in 2000. When in Chandler, she attended St. Stephens Catholic Church and was also a member of the SunBird Singers choir.

Carolyn’s faith was apparent in her everyday life, even the day she was presented with going into hospice. Her exact words when she was told were, “I have faith in Jesus.”

She was preceded in death by her parents, Eugene and Mildred Tobin of Pierre, S.D.; grandparents; two infant sons; baby boy Ugland; who was stillborn in 1963; and Michael Brian Ugland born in 1964, both were full term. She also was preceded in death by numerous aunts, uncles, cousins, sisters and brothers-in-law, nephews, a niece, and grandnephews.