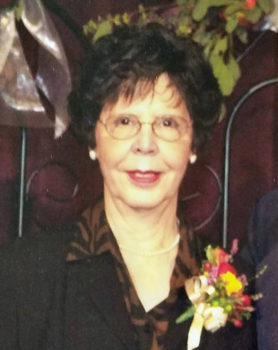 Marilyn June Palmer French, 89, died April 11, 2020, at her home in Chandler, Ariz. She was born April 3, 1931, in Beadle County, S.D., to Bertha Hurst Palmer and Otis Clyde Palmer. Marilyn lived and attended school both in Beadle County, S.D., and Renville County, Minn. She married Vernon Lee French on June 13, 1948, after his return from WWII. They raised three children. Vern and Marilyn moved from Danube, Minn., to Bryan, Ohio, in 1959 for Vern to take a position with The Ohio Art Company where they made their home for 59 years. Since the early 2000s, they lived in SunBird Golf Resort in Chandler, Ariz., initially as snowbirds (winters) and full time the last two years.

In the early years, Marilyn babysat, was an accomplished seamstress, and sold Avon until she became the hot foods cook with Bryan City Schools where she worked for 30 years. She was known as “the spaghetti lady,” cooking her secret sauce recipe for many community spaghetti dinners. Marilyn was actively involved with Lions Club, bridge clubs (her first love) in both Ohio and Arizona, golf, Women’s Connection, and loved “coffee with the girls.”

Marilyn loved her family, especially cooking for family holidays and gatherings. She also loved her A to Z senior group, Sunday School class, and New Hope Community Church in Bryan, Ohio. Marilyn loved the Community Church of SunBird in Chandler, Ariz., where she and Vern served on the leadership committee for three years. She is remembered as being such a great lady, a real spitfire, a gardener, a sharp card player, and a talented cook. Marilyn is survived by her husband of close to 72 years, Vernon French of Chandler, Ariz.; brother Larry (Ruth) Palmer of Chandler, Ariz.; son Curtis (Susan) French of Syracuse, Ind., and Chandler, Ariz.; son Craig (Pat) French of Chandler, Ariz.; daughter Cherri (Steve) Meyer of Bryan, Ohio; 13 grandchildren; and 19 great-grandchildren. Marilyn was preceded in death by her father Clyde Palmer, her mother Bertha Palmer, and her sister Donna Jean Palmer Schmidt.

Due to the current situation, memorial services are being planned later in Bryan, Ohio, and in Chandler, Ariz. Arrangements have been entrusted to Krill Funeral Service, 860 West Mulberry Street, Bryan, Ohio.

Condolences can be left for the family by visiting the online guest book at www.krillfuneralservice.com.

Many thanks to my SunBird friends for their cards, phone calls, and prayers on the death of my husband Terry. He died on March 29, 2020, of Alzheimer’s. We were married for 56 years. Three children and three grandchildren also survive..