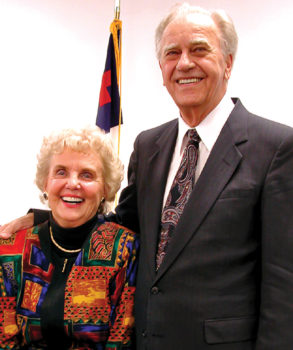 On Jan. 19, 2020, James E. Rentz, former senior pastor and founder of the Sun Lakes Baptist Church, joined his wife Elnerva Rentz in the arms of the Lord.

Jim Rentz was born in Mora, Minnesota, and remained there until three days after graduation from high school when he enlisted in the U.S. Navy. He became a Christian while he was in the Navy, and later answered the call of God to go into the ministry.

Upon discharge, he entered Hamline University and simultaneously enrolled in Bethel Theological Seminary. He graduated from Hamline in 1951 and from Bethel five days later with a Bachelor of Divinity degree.

The Southern Baptist denomination asked him to take his successful ministry to a large church in Winnipeg, Alberta, Canada—Grant Memorial Baptist Church. Two years later, they had another special assignment, asking him to go to the fastest-growing area in Southern California to pastor a new church plant, Grace Baptist Church. He and his family moved to Valencia where the 40 members had renovated a blacksmith shop for worship services. Seven years later, membership had increased to 1,050. While there, he served on the College of the Canyons School Board and was chairman of the board his last year.

In 1977, the family moved to Tempe where for 10 years he was assistant pastor of the large Grace Community Church.

In 1987, he retired. Well, retired, as folks in Sun Lakes know, is a comparative term. For a year, Jim and his wife Elnerva became evangelists with Jimmy Nettles, traveling throughout the southern U.S. He led the song services, did some of the preaching, followed up with those who responded to the messages, and worked with the counselors.

Then he was asked to participate in a survey of the Sun Lakes area where thought was being given to plant a church. The lure to Jim Rentz was too great. No members. No church. No money. How could he resist?

In April, 1989, he began with a home Bible study. Four people attended. The next week, there were eight, then 16. It was becoming too big for a home, and the burgeoning church met in the Ceramics Room at Cottonwood. Thirty-four people attended that first service. Five months later, the church outgrew the space and moved to the Civic Center, finally ending up in the new San Tan Ballroom where they stayed until January, 1996. A year earlier, they had broken ground on the five-acre lot Ed Robson had sold them on the corner of Riggs and Dobson Roads. It was time to move into their new facility. Under Pastor Jim’s leadership, the church population grew to almost 500 members.

It was at Bethel Seminary that he met his wife Elnerva. “I couldn’t help myself,” he revealed. “She was brilliant, beautiful, had a great personality… and could play the piano.” These were, and remain, the ideal qualities for a pastor’s wife. He added with all sincerity, “I would have been lost without her.” And, indeed, he would have. She was a special, special lady who preceded Jim in death three months earlier on Oct. 16, 2019.